Transposon is a piece of DNA sequence with an inherent ability to move from one genomic location to another.

Aging is a complex phenomenon. Scientists have been trying to figure out mechanisms underlying changes that occur in behaviour and cognition processes due to aging. Among various possibilities, the role of retrotransposons - popularly known as jumping genes - is suspected to be critical in the process of aging. 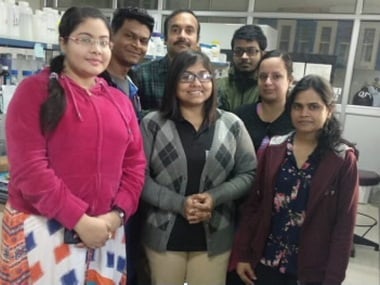 Now a group of Indian scientists have found that a jumping gene known as LINE-1 retrotransposons becomes highly active with age in different anatomical regions of the human brain like frontal cortex, hippocampus and basal ganglia. This indicates that alteration of neuronal genome occurs as age advances. The group is now engaged in finding out correlation between activation of retrotransposons in human brain and its possible effects on behaviour.

"We have demonstrated that LINE-1 jumping gene is highly active in different anatomical regions of normal human brain like frontal cortex, hippocampus and basal ganglia as compared to other non-brain tissues like kidney, heart, liver and lung,” explained Dr Prabhat Mandal from Department of Biotechnology, Indian Institute of Technology Roorkee. The experiments were conducted using post-mortem tissue obtained National Institute of Mental Health and Neurosciences, Bangalore.

Transposon is a piece of DNA sequence with an inherent ability to move from one genomic location to another. Its discovery in 1956 went against the notion of genome being static. There are two types of transposons - DNA transposon where a piece of DNA sequence moves from one place in the genome to another either by ‘cut and paste’ or ‘copy and paste’ mechanism; and RNA transposons - also called retrotransposon- which move within a genome using RNA as an intermediate.

LINE-1 or Long Interpersed Element-1 is the most abundant and active jumping gene sequence in human genome. Almost 500,000 copies of LINE-1 sequences are present in human genome with 100 to 150 copies actively jumping. An active LINE-1 encodes two proteins designated as ORF1p and ORF2p; both proteins are required for jumping LINE-1 sequences from one place of the genome to another place.

Studies on jumping genes are significant as it can cause insertional mutations leading to several diseases. Till date more than 100 disease-causing jumping gene insertions have been identified. "Our work reveals that the number of L1 copies are more in neurons compared to other somatic cells. This work also pointed that the copy number of L1 retrotransposon might increase with age and making neuronal genome plastic as we get older," he added. The research results have been published in journal Mobile DNA.