Japanese company FutureModel to release NichePhone-S phone with 6.5 mm thickness and Android 4.2 for about $ 95

The shape of the NichePhone-S is quite similar to a small calculator and it has a classic T9 input as seen on the likes of the Nokia 3310.

Japanese company FutureModel are planning to release the 'card-sized' NichePhone-S phone in Japan. Although NichePhone-S runs on Android OS, it cannot do much more than making calls, texting and streaming music. For perspective, users can't install any app on this Android-powered smartphone. The shape of the device is quite similar to a small calculator and it has a classic T9 input as seen on the likes of the Nokia 3310. 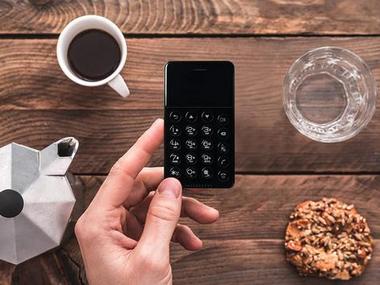 According to a report on the device by Engadget Japan, the phone is scheduled to release on 10 November with a price tag of around $ 95. The phone weighs 38 grams and has a thickness of 6.5 mm making it thin enough to slip into your wallet. Due to this thin design, the phone is charged using a separate adaptor that will be included in the purchase box. The Niche Phone-S does not pack any speakers but it does have a Wi-Fi tethering option.

The phone has a small screen on the top and it will reportedly be running on Android 4.2 out of the box. According to the listing on Gadget Mart, the device will be powered by MediaTek MT6572A. According to the report, the device offers Bluetooth connectivity for headsets along with the ability to record memos. It has a single nano-SIM slot on the back and supports 3G connectivity from NTT DoCoMo and SoftBank. The phone has a battery capacity of 550 mAh which offers about 3 hours of talk time along with 72 hours of standby time. The device will be available in two colours of black and white.

Nokia 3310 2017 Review: If nostalgia is what you seek, you are better off getting the original

Nokia 3310 (2017) first impressions: The device is pure nostalgia, but expect little else

In a world dominated by smartphones, Africans did not give up on feature phones

Nokia 3310 proves that feature phone are still alive and kicking

HMD Global expected to launch Nokia 3310 at end of April with Nokia 3,5, and 6 launching in May