A Japanese and an American astronaut floated for hours outside the International Space Station Friday on a spacewalk to repair the orbiting outpost’s robotic arm and move some equipment into storage. 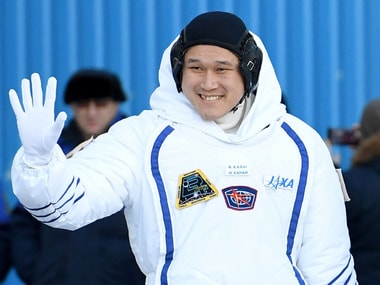 Norishige Kanai of JAXA during the send-off ceremony before the launch of the Soyuz MS-07 spacecraft. Image: Reuters

The spacewalk, broadcast live on NASA TV, was the first for Japanese Aerospace Agency (JAXA) astronaut Norishige Kanai, and the fourth for his US counterpart Mark Vande Hei.

“You have been doing a great job today,” a ground controller told Kanai before he returned to an airlock after more than five hours in the vacuum of space.

His US colleague remained outside the space station for several minutes to finish some other tasks, but a NASA commentator said both astronauts “have completed all of their primary tasks,” ahead of schedule.

The astronauts were about 250 miles (404 kilometers) above Africa as the spacewalk neared its conclusion.

The outing began at 1200 GMT when the duo switched their spacesuits to battery power before venturing into space.

Kanai, 41, is a medical doctor and diver who goes by the nickname “Neemo.”

The Tokyo-born lieutenant in the Japanese Maritime Self-Defense Force became an astronaut in 2009.

He also spent 13 days in the Aquarius underwater lab off the coast of Florida as part of NASA’s Extreme Environment Mission Operations (NEEMO) crew in 2015.

Kanai is the fourth Japanese astronaut to walk in space. The goal of the spacewalk was to move some components related to the space station’s Canadian-built robotic arm, known as Canadarm2, an aging but crucial piece of equipment which has undergone a series of repairs in recent months. The robotic arm is used to move astronauts and heavy equipment around outside the research laboratory.

The astronauts had to move a spare handpiece, called the Latching End Effector (LEE), from a storage spot outside the ISS into the Quest airlock so it can be returned to Earth on a future cargo mission for refurbishment and eventual relaunch.

“This LEE was replaced during an Expedition 53 spacewalk in October 2017,” NASA said in a statement.

“They also will move an aging, but functional, LEE that was detached from the arm during a January 23 spacewalk and move it from its temporary storage outside the airlock to a long-term storage location.”

That device will be kept at the station as a spare.

Friday’s spacewalk was the 208th in support of space station assembly and maintenance, and the third this year.