Is Cyclone Fani a result of global warming? A climate scientist has the answer

Climate change is usually not the genesis of a problem; it exacerbates existing problems.

Cyclone Fani, currently raging in the Bay of Bengal, is the most powerful storm yet in the pre-monsoon cyclone season. Currently classified as a severe cyclonic storm with wind speeds of 80-90 km/h, it is expected to intensify to an “extremely several cyclonic storm” by 1 May, reaching wind speeds of up to 185 km/h.

According to the Indian Meteorological Department (IMD) forecast, the cyclone will veer northwards on 1 May instead of making landfall in Tamil Nadu or Andhra Pradesh. Despite being hundreds of kilometres away, it is expected to bring wind surging up to 50 km/h along their coastlines. 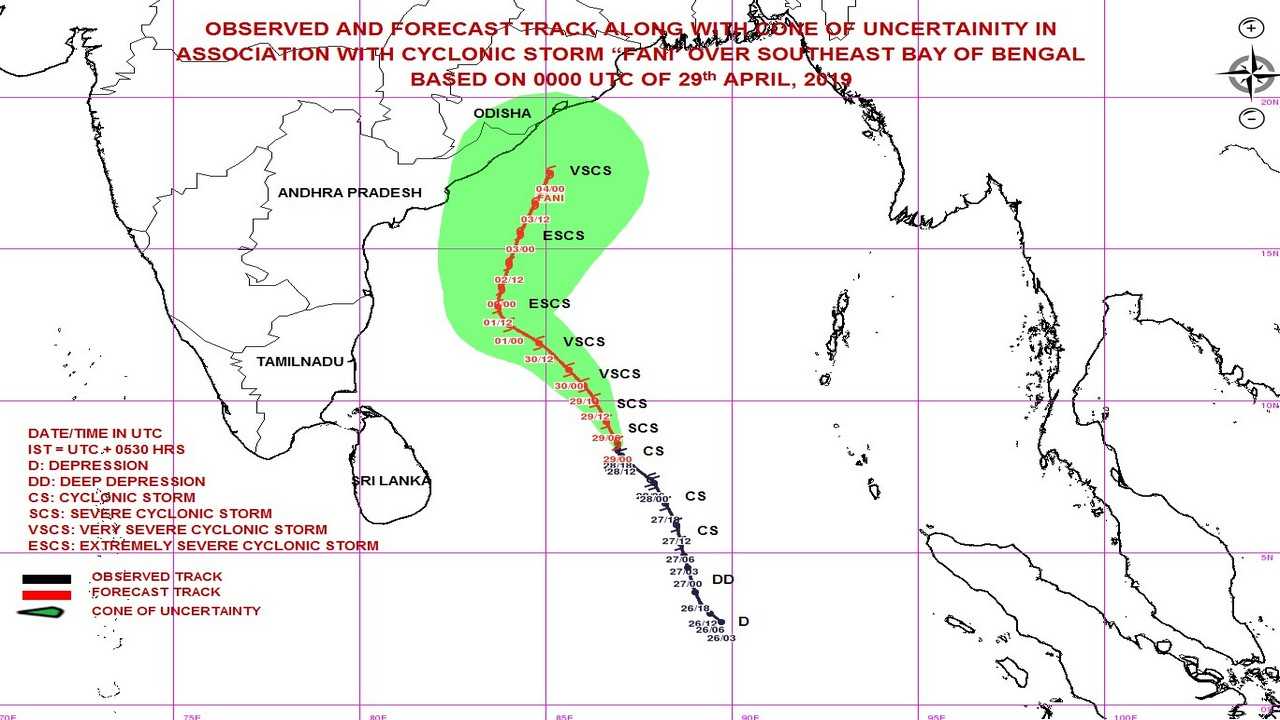 The abrupt change in the trajectory of the cyclone means that it will inflict relatively little damage to life and property. By the same token, neither will it bring relief from the intense summer heat to India’s east coast. However, the IMD has issued a warning to fisherfolk on India’s east coast not to venture into the deep sea until 2 May.

What relation, if any, does Cyclone Fani have to global climate change? How do we expect it to change in the future?

What causes and powers a cyclone and how will global warming affect it?

A fully formed cyclone is so powerful that it can span hundreds of kilometers in diameter, extend 15 km into the atmosphere and travel up to 10,000 km before dissipating.

An “average” cyclone consumes millions of MW of power during its lifetime of a few days, far exceeding the entire world’s electricity generation capacity during that time.

Where could cyclones possibly draw such immense power from and what implications does global warming have for this power source, and hence, for future cyclone intensities?

All tropical cyclones form over warm ocean waters and eventually dissipate after making landfall. While details include favourable wind and humidity patterns, cyclone genesis and sustenance fundamentally draw their power from water evaporating from the ocean, which gets cut off once cyclones progress over land.

Cyclones vacuum up the evaporating water, which delivers huge amounts of heat energy and moisture that keeps the storm raging. The collected moisture is transported over vast distances and dumped in intense spurts of rainfall over land. The warmer the water, the faster the rate of evaporation, which in turn results in more severe storms. While the relationship is more complex in the real world, this essentially explains the role of global warming in intensifying storms.

Cyclones will intensity in a warming world

Warmer ocean waters contain more energy and sustain a greater rate of evaporation from their surface. Aligned with what we would expect from how storms gather power, climate model simulations project that the frequency of the most severe cyclones will increase with global warming.

Severe cyclones in the Bay of Bengal have, in fact, increased by about 26 percent in the previous century, as they have in the rest of the world. Powerful cyclones today also intensify quicker than they did 30 years ago.

Recent research on some of the most destructive hurricanes (another word for cyclones) in the Atlantic basin, like Katrina, Irma and Maria, found that they brought 5 – 10 percent greater rainfall than they would have in a pre-industrial world (cooler by “merely” 1°C than the present).

Can Cyclone Fani be attributed to global warming?

Neither does every smoker develop lung cancer and nor can lung cancer in an individual patient be attributed with certainty to smoking. Yet it is beyond doubt that smoking increases the likelihood of developing lung cancer.

Analogously, individual storms can rarely be attributed primarily to anthropogenic global warming. An additional problem with cyclone attribution is that historical data records on cyclones aren’t yet long enough to be statistically conclusive: we have a database of perhaps a few thousand cyclones from the past century, unlike millions of data points on lung cancer patients.

For these reasons, it is still being debated in scientific circles how changes in frequency and intensity of cyclones observed so far can be attributed directly to anthropogenic global warming as against long-term periodic natural variations. 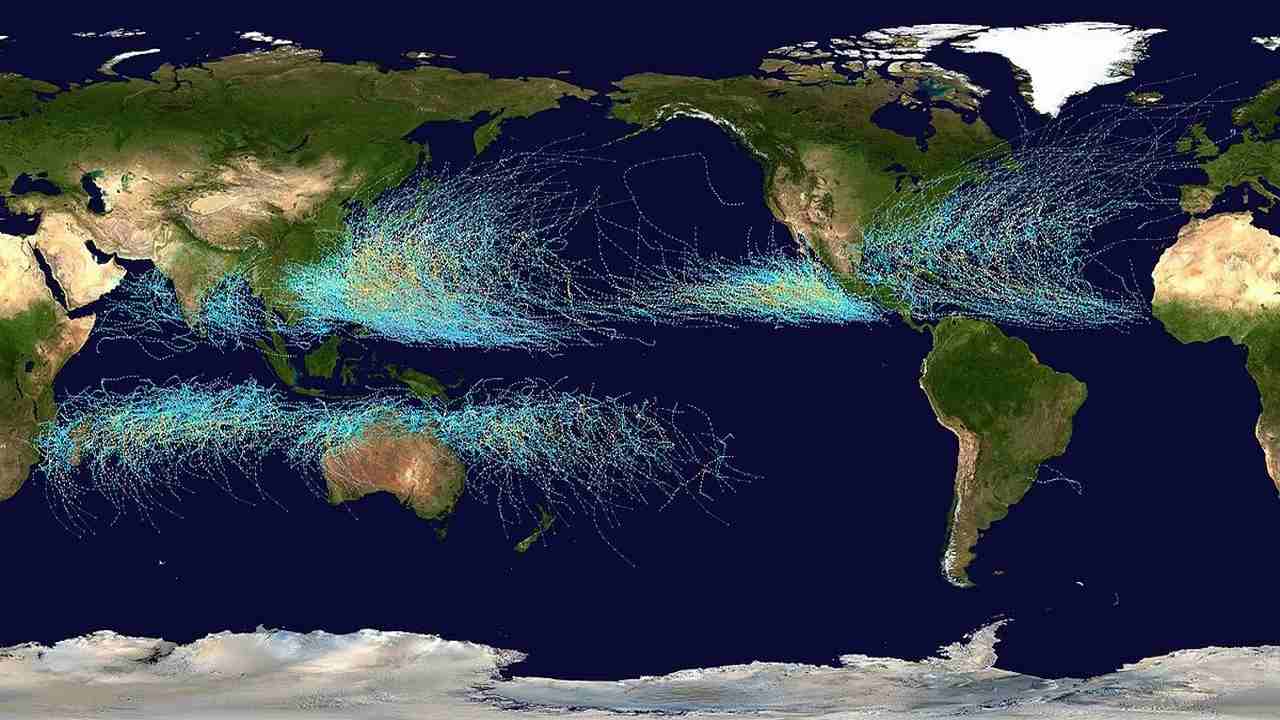 This map shows the tracks of all tropical cyclones which formed worldwide from 1985 to 2005. India’s east coast and Bangladesh are among the most active zones despite being much less so than the Atlantic and Pacific basins. Background image: NASA, Map: WPTC track map generator by Nilfanion, Data sources listed here

Specific geographical and environmental factors make the Bay of Bengal a cyclone active basin regardless of anthropogenic global warming. To that extent, cyclones like Fani would form even in a counterfactual world without anthropogenic global warming. Yet, the basic physical concept of how cyclones are powered is clear and there is no scientific doubt that cyclones of greater intensity will become increasingly more common as our planet continues to warm.

Therein lies a deeper lesson: climate change is usually not the genesis of a problem; it exacerbates existing problems.

Chirag Dhara is a climate scientist.