iOS 11.1.2 released by Apple for all of its iOS 11 compatible devices

Alongside the iPhone X display issue, a fix for distortions of Live Photos and videos captured were also made available.

Apple has rolled out the iOS 11.1.2 update for its iOS-powered devices on 17 November. The latest iOS update is now available for iPhones (5S and above), iPads (Air and above) and iPod Touch (6th gen) devices. 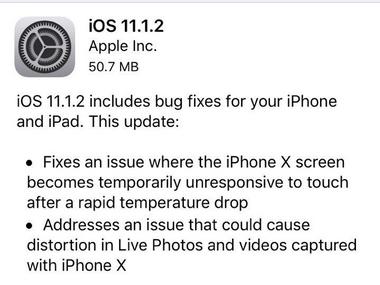 The new version issues a fix for issues like the temporary unresponsiveness of the iPhone X  display at cold temperatures. Alongside the iPhone X display issue, the update also fixes distortions of Live Photos and videos captured from the iPhone X.

This comes almost a week after Apple announced the release of the latest version of its mobile operating system, hte iOS 11.1.1. The new update mentioned two fixes as part of the changelog. The first being the auto-correct issue with the keyboard and the second issue being instances where the ‘Hey Siri’ command stopped working.

As previously reported, the company was working on releasing updates this week to fix the auto-correct problem, where some users were unable to type the ‘i’ character. iOS should notify users about the incoming update. However, if your iPhone does not prompt you to update your device, you can head to Settings’ app and navigate to ‘Software Updates’ to manually check the update.