Internet shutdown declared in parts of Delhi: How to stay connected offline

Vodafone and Airtel Bharti have suspended mobile services in parts of New Delhi during the ongoing Anti-CAA protests.

Delhi is witnessing an Internet shutdown today. As protests against the Citizenship Amendment Act (CAA) are taking place in several parts of the country, in Delhi NCR, the situation seems to be tenser than anywhere else. The central government has imposed section 144 in the city and some mobile services, including by Airtel and Vodafone, have been suspended in parts of Delhi.

As per a tweet by Airtel Bharti, "voice, SMS and data services" have been suspended at a few locations in Delhi. The Vodafone statement reads, "As per the directive received from the Government, Services are stopped at few locations (Jamia, Saheen bagh, Bawana, Seelampur, Jaffrabad, Mandi House and part of Walled city). As a result of this, you will not be able to use services till 1 pm at these locations." Hi! As per the directive received from the Government, Services are stopped at few locations (Jamia, Saheen bagh, Bawana, Seelampur, Jaffrabad, Mandi House and part of Walled city). As a result of this you will not be able to use services till 1pm at these locations - Tina

Hi! We're complying with instructions received from govt. authorities on suspending Voice, SMS and data in certain areas in Delhi. Once the suspension orders are lifted, our services will be fully up and running. We’re sorry about the inconvenience. Thank you, Manisha https://t.co/2G23qpsqlP

As per the official statement, these are the areas where the government has suspended mobile networks:

If you too have been affected by the internet shut down, here are a few ways to stay connected to your friends and family despite the network suspension.

Step 1: Send an SMS to 9248948837 and you will receive message from twitter confirming that your number has been registered

Step 2: Once that is done, all you need to do is type the tweet with the concerned short code (short codes are for the command you want to retweet, DM, follow and so on) and send it t0 9248948837  and that is it

The desired action will be posted via your twitter profile.

Here is a list of a few apps that you can install now to chat offline.

This app will available on both Android and iOS devices. You can chat privately with someone who is within 330 feet (100 meters) of you. You can chat one-to-one, share your location and broadcast a message.

To use the app you do not even require any network connection. As long as you have the app downloaded on your device, all you need is Bluetooth to chat with people in your range. 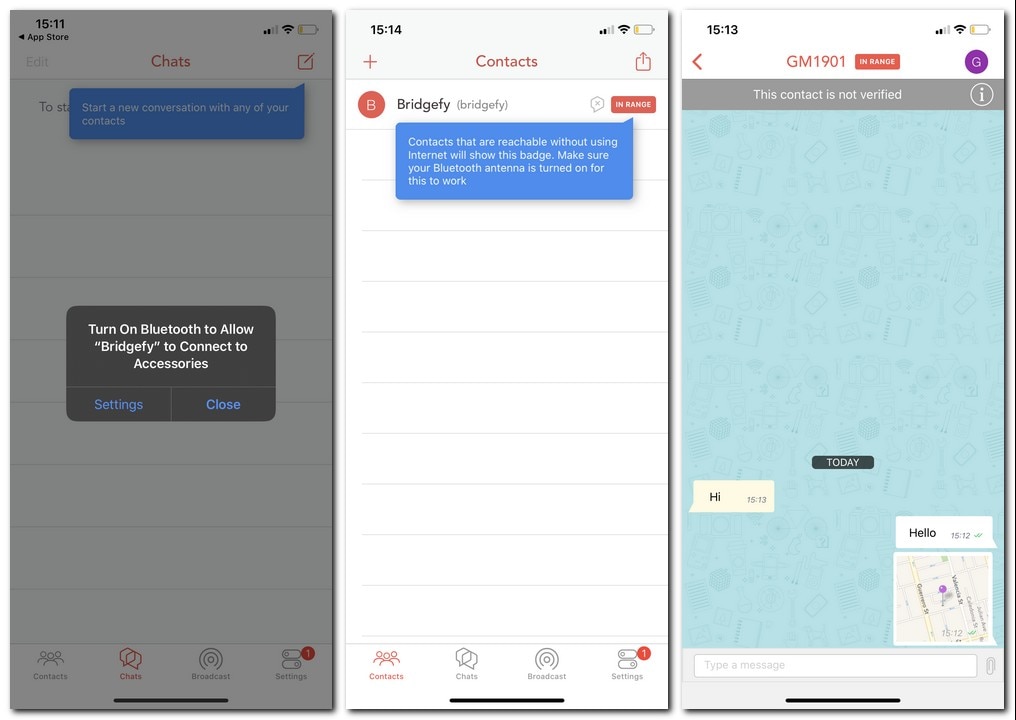 To use this app, just download it pon your phone and register a username and you are good to go. You can install the app by clicking here (Android users) and (iOS users).

This app is only applicable for Android users. You will have to scan your QR code to connect with someone via this app. Once the code is scanned you can chat with the person. The app doesn't mention the vicinity wherein you can communicate with a person, but considering the app also uses Bluetooth or Wi-Fi to establish contact, a distance of approximately 300 m from the person you are trying to contact should be required.

One notable thing here is, you can just chat via this app and you cannot send any images or share location with anyone. You can download the app by clicking here.