Indians downloaded over 4.8 billion apps in the first three months of 2019: Report

Since the cheap mobile data boom inspired in part by Jio nearly three years ago, Indians have been constantly watching videos and downloading apps. As a matter of fact, a report has pointed out that Indians made about 4.8 billion app downloads on their smartphones in the first three months of this year. As per a report by Sensor Tower, India was followed by the US which had 3 billion app downloads of its own. The top apps that were downloaded in India were the controversial TikTok, WhatsApp, Like, Hotstar, Facebook, Messenger, SHAREit, Helo, MX Player and UC Browser.

The only Indian company on the list happened to MXPlayer which just goes to show that India's app space is dominated by Chinese and American developers. Facebook, WhatsApp, Messenger, and Hotstar are all owned by American companies while TikTok, ShareIt, Like, Helo and UC Browser are owned by Chinese companies. 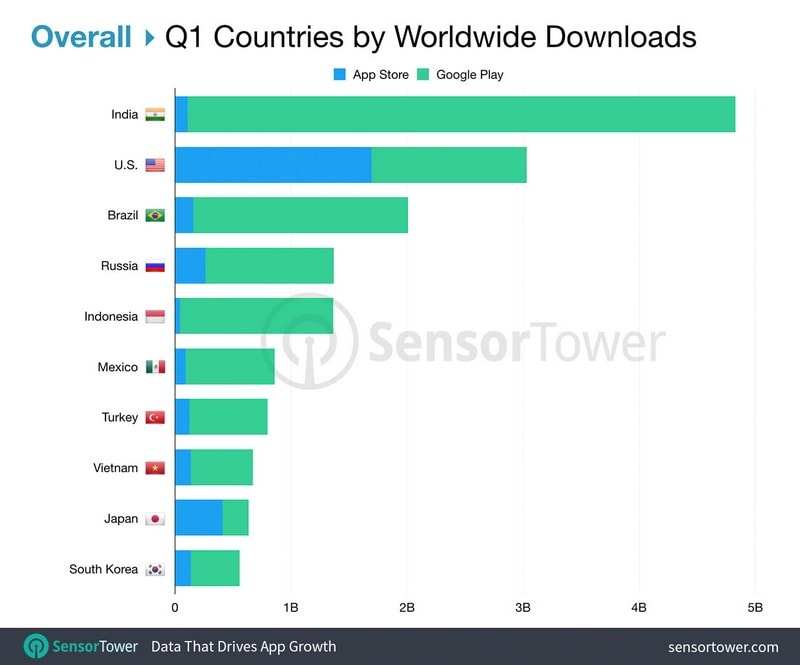 “The growth in app instals we’re tracking in India is closely tied to the growth in new smartphone owners there, particularly Android users,” said Randy Nelson, head of mobile insights at Sensor Tower.

Nelson also noted that app downloads in the country had been growing at a faster pace from mid to late 2016, which was the time Reliance Jio came into the market.

"The growing mobile connectedness of India has only bolstered the desire of firms to bring solutions to the country and increased their ability to scale,” said Kelly Taylor managing partner, global head of social at GroupM in an interview with the Economic Times.