microbial biofilms are hard to eliminate because bacteria build barriers using sugars, proteins and DNA molecules that prevent antibiotics to do action.

Biofilms are dense, sticky mat like assemblies formed by communities of bacteria in critical medical equipment such as catheters and implants. Such microbial biofilms are hard to eliminate because bacteria build barriers using sugars, proteins and DNA molecules that prevent antibiotics to reach their target sites within microbes. It is also a problem in food processing industry. 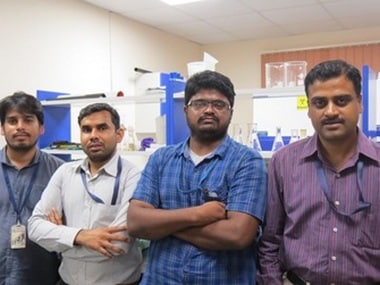 Now a team of Indian scientists have figured out to disrupt such microbial assemblies and prevent them from forming. Researchers from SASTRA University at Thanjavur have synthesized a new class of glycolipid based surfactant from renewable feedstocks, monosaccharide and cashew nut shell liquid. The term “surfactant” stands for “surface active agents” often used in detergents, wetting agents, emulsifiers and foaming agents.

“We have developed a simple method to produce non-ionic surfactant from cardanol, which is present in cashew nut shell - a waste material from the cashew-nut industry. The glycolipid surfactant production from waste motivated us to test its capacity to disrupt pathogenic biofilms,” said Dr C S Srinandan, who led the research team along with Dr Subbaiah Nagarajan.

When researchers performed reaction of cardanol derivatives and monosaccharides (carbohydrates like glucose and galactose) under mild conditions, it resulted in formation of glycolipids. Glycolipids derived from glucose displayed exclusive formation of cyclic form, while in case of galactose both cyclic and acyclic structures are formed. This suggested that the nature of monosaccharide determines existence of cyclic or acyclic or both in solution form.

“Glycolipids having cyclic structure self-assemble into the gel in highly hydrophobic solvents and vegetable oils, and display foam formation in water. These glycolipids can have greater significance because commercially used anionic and cationic surfactants have the adverse effect on the biological system,” researchers said.

Biofilm bacteria display resilience towards environmental factors including antibiotics. Around 80% and more bacterial chronic infections are caused by biofilms that are tolerant to 1000 times more antibiotic concentrations than free-living cells of bacteria.

The new findings hold the promise of developing new strategies to control hospital-acquired infections like pneumonia and urinary tract infection. The study results have been published in journal ACS Applied Materials & Interfaces.

Dr. Praveen Kumar Vemula, a scientist at the Institute for Stem Cell Biology and Regenerative Medicine, Bangalore, who is not connected with the study, said “disruption of biofilms is a much-needed strategy to fight against pathogens. Demonstration of biofilm disruption using glycolipid amphiphiles is very encouraging. Such supramolecular self-assembled materials could be used as compositions for the cleaning surfaces at public places such as hospitals, schools, and public transport areas.”

Another expert, Dr. V.P. Venugopalan (Bhabha Atomic Research Centre), said "what makes the research work interesting is the ease with which the nonionic surfactants can be synthesized using cheap renewable feedstock and cashew nut shell liquid".

Galaxy Surfactants IPO may be good for the long-term