A new Aadhaar-based mobile application is being developed, through which every soldier will be able to post his grievances online said the Army chief.

The Indian Army will launch a new online grievance redressal system which will be based on Aadhaar number, Army chief General Bipin Rawat said on Monday. 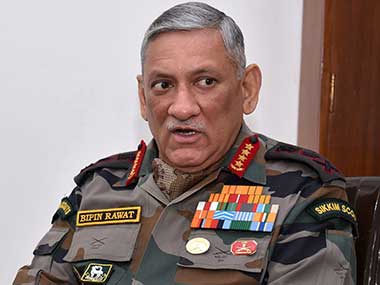 "A new Aadhaar-based mobile application is being developed, through which every soldier will be able to post his grievances online, and it would be addressed as soon as possible," the Army chief said at the 70th Army Day parade.

"It will also have other useful information for the soldiers. It will be launched soon."

He also said that the Army Welfare Education Society has approved a plan for two residential schools with a capacity of 2,000 students.

One of the two schools will be near Mamun Military Station in Pathankot. A law college will also be started near Pune by the Army.

The Army chief last week said the Army is working on evolving a better system for providing aid to the children of martyrs and those disabled in action after the government put a Rs 10,000 cap on the monthly fund.

An order dated 13 September by the Department of Ex-Servicemen Welfare of the Defence Ministry said the fee for tuition and hostel expenses for children of martyrs would be capped at Rs 10,000 per month, as per the recommendations under the 7th Pay Commission. The order came into effect from 1 July.