India is "open and flexible" on negotiating terms with Apple for making iPhones in the country, Union Minister Ravi Shankar Prasad says.

India is "open and flexible" on negotiating terms with Apple for making iPhones in the country, Union Minister Ravi Shankar Prasad has said, asserting that the tech titan "will not be a loser" if it opts to do so in Asia's third-biggest economy. 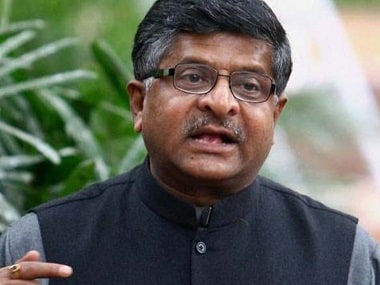 In an interview to PTI, the IT minister said: "We are in the process of serious engagement with Apple. Let us await their response. I can only tell you, Apple will not be a loser in India (because of the opportunities it presents)... but let us wait for the formal proposal."

He exuded confidence that India offers a massive domestic market and export potential for smartphone companies.

He asserted however that incentives cannot be doled out to one player, to the detriment of another.

"Naturally, incentive cannot be in a manner that dislocates the current players. But we are open and flexible in case of Apple, what they bring to the table," Prasad said.

India is not just a large consumer market but can also serve as a strong export hub for global mobile phone makers like Apple, he said, adding that the government is engaged in discussions with the US-based firm on the issue. Apple did not respond to an email seeking comments.

Smartphone makers are looking to boost business in India – a country of 1.3 billion people – as sales in other large markets like the US and China are stagnate. India is the second largest market globally after China in overall mobile subscriber base, and had 1.18 billion users at the end of March 2018.

The explosion in mobile usage has been fueled by low tariffs, liberal data allowances and intense competition.

Apple does not make devices itself and partners with contract manufacturers to handle the capital-intensive demands of building factories and hiring staff. All Apple devices available in India are imported, except for the iPhone SE that is assembled by Wistron in the country.

Asked if Apple will be given special incentives to expand local manufacturing, Prasad said: "That is a matter of negotiation".

Prasad said the government is also working on finalising the new electronics policy, with a sub-segment on export-oriented initiatives.

"The idea is to make India a big hub of electronics manufacturing to serve domestic as well as outside markets," Prasad said.

In January, senior officials of the iPhone maker had met Commerce and Industry Minister Suresh Prabhu.

Apple has sought concessions including duty exemption on manufacturing and repair units, components, capital equipment and consumables for smartphone manufacturing as well as service/repair for a period of 15 years. It also wanted a reduction in customs duties on completely-knocked-down and semi-knocked-down units of devices that are to be assembled in the country.

Apple is extremely bullish on India and plans to launch all its initiatives, including retail, its chief executive Tim Cook had said earlier this month.

While he acknowledged that Apple has an "extremely low" overall market share in India, Cook said the company is "putting a lot of energy" in the country.