Samsung is set to unveil its new Note device next month in New York, just over a year after the exploding battery crisis that saw it remove the Note 7 from shelves.

South Korean giant Samsung on Thursday posted record quarterly earnings, putting it on course to overtake Apple as the world's most profitable tech firm as it seeks to move past a bribery scandal and last year's recall debacle. 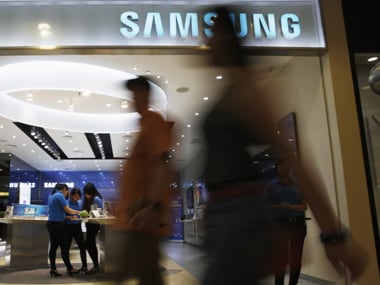 The firm said huge sales of its new Galaxy S8 smartphone and demand for its memory chips were behind the jump in April-June and predicted another blockbuster report for the current quarter to September. It said operating profit soared a forecast-beating 72.9 percent from the previous year to 14.07 trillion won ($12.6 billion), compared with consensus forecasts of $10.6 billion for US titan Apple, which is due to report next week.

However, Greg Roh, an analyst at HMC Investment Securities, told AFP: "Samsung has surpassed its rivals for now but Apple usually sees little fluctuation in its profits whereas Samsung's profits fluctuate largely on memory chip prices." The world's top maker of smartphones and memory chips also said net profit surged almost 90 percent to 11.05 trillion won, its best quarterly result in five years. "The S8 has indeed helped get Samsung back onto its feet, hopefully putting the Note 7 debacle behind it," Bryan Ma, a technology industry analyst at IDC, said before the announcement.

"But we also have to keep in mind that a lot of Samsung’s momentum is from memory and displays too, so it’s not all about the S8, either," he said, according to Bloomberg News. Samsung has been trying to overcome an embarrassing recall last year of its flagship Galaxy Note 7 smartphone over exploding batteries, which cost it billions of dollars and dealt a blow to its reputation. It has also been buffeted by a scandal that has seen vice-chairman and heir Lee Jae-Yong charged in connection with the sprawling corruption scandal that brought down South Korean president Park Geun-Hye.

Profit breakdown showed the firm's semiconductor business raked in 8.03 trillion won in operating profit in the second quarter, up 204 percent from the previous year. Samsung provides its chips to other companies including Apple. "The components businesses drove significant earnings growth... thanks primarily to strong memory demand for high-density DRAMs and SSDs for servers," the company said. This month the firm said it will invest 20.4 trillion won by 2021 to expand and upgrade its chip plants in the South Korean cities of Pyeongtaek and Hwaseong.

The factory in Pyeongtaek, 70 kilometres (44 miles) south of Seoul, is the world's biggest and has recently started production after the firm spent 15.6 trillion won in two years to build it. It also plans to expand its NAND chip plant in the Chinese city of Xian to meet booming demand for the chips used in high-end storage products, it said. With demand for Samsung's memory chips forecast to continue until next year, analyst Roh said: "Samsung is expected to post another record profit in the third quarter at around 15 trillion won."

Samsung is set to unveil its new Note device next month in New York, just over a year after the exploding battery crisis that saw it remove the Note 7 from shelves. Lee is being held in custody with other key executives, accused of bribing the now-disgraced Park and her secret confidante with millions of dollars in a bid to seek government favours. He has effectively been at the helm of the group since his father suffered a heart attack in 2014.

The indictment in February sent shockwaves through the firm and triggered the announcement of a major reform of its top-down management style. The scandal has cast renewed light on the cosy ties traditionally enjoyed by the government and the family-controlled conglomerates known as "chaebols" that dominate the country's economy. A court is due to give its verdict on Lee by the end of next month.