Increased dependancy on phones can lead to separation anxiety or 'nomophobia', says study

Do you tend to panic immediately if your phone runs out of battery or isn't beside you even for a while? Beware, you may develop "nomophobia" that can cause increases in heart rate, anxiety, blood pressure, and unpleasant feelings, researchers warned. 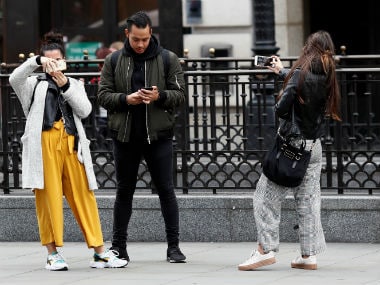 "Nomophobia" or in other words smartphone separation anxiety is the feelings of discomfort or anxiety caused by the non-availability of a mobile device enabling habitual virtual communication. The findings showed that personal memories evoked by smartphones encourage users to extend their identity onto their devices.

"When users perceive smartphones as their extended selves, they are more likely to get attached to the devices, which, in turn, leads to nomophobia by heightening the phone proximity-seeking tendency," said Seunghee Han, doctoral student at the Sungkyunkwan University, Seoul. Although smartphones have indeed positively influenced various aspects of life, the technology has also had negative effects such as overuse, dependence, and addiction.

As a result separation from smartphones is found to cause increases in heart rate, anxiety, blood pressure, and unpleasant feelings, the study published in the journal Cyberpsychology, Behaviour and Social Networking, revealed. For the study, the team developed a model that identified a link between factors such as personal memories and user's greater attachment to their smartphones, leading to nomophobia and a tendency to phone proximity-seeking behaviours.

Nomophobia may serve as an indicator of a social disorder or phobia for individuals with a strong dependency on communication through virtual environments, research suggested. "Nomophobia, fear of missing out (FoMo), and fear of being offline (FoBo), all anxieties born of our new high-tech lifestyles, may be treated similarly to other more traditional phobias," said Brenda K Wiederhold, from Interactive Media Institute, California.

"Turning off technology periodically, can teach individuals to reduce anxiety and become comfortable with periods of disconnectedness," Wiederhold added. Further, as technology becomes even more personalised and people tend to grow ever more reliant upon it smartphone separation anxiety will become a bigger and bigger issue for people in the future, the researchers warned.

Thus, "users should be conscious not to become overly dependent on smartphones while benefiting from the smartness of the technology", Han added.