In minor victory for electric cars, Britain to ban the sale of petrol and diesel cars from 2040

While many automakers may find it hard to countenance the end of the combustion engine, some have embraced a future where electric cars rule.

Britain will ban the sale of new petrol and diesel cars from 2040 in an attempt to reduce air pollution that could herald the end of over a century of reliance on the internal combustion engine. 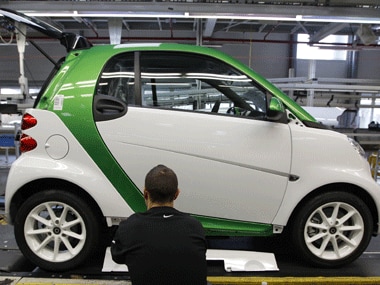 Britain's step, which follows France, amounts to a victory for electric cars that if copied globally could hit the wealth of oil producers, as well as transform car industry jobs and one of the icons of 20th Century capitalism: the automobile itself. The mayors of Paris, Madrid, Mexico City, and Athens have said they plan to ban diesel vehicles from city centers by 2025, while the French government also aims to end the sale of new gasoline and diesel vehicles by 2040.

The British government has been under pressure to take steps to reduce air pollution after losing legal cases brought by campaign groups. Prime Minister Theresa May's Conservatives had pledged to make "almost every car and van" zero-emission by 2050. "There should be no new diesel or petrol vehicles by 2040," environment minister Michael Gove told BBC Radio. The ban would only apply to conventional rather than hybrid vehicles that have both an electric and combustion engine, Gove's ministry said.

There is a mountain to climb, however. Electric cars currently account for less than five percent of new car registrations in Britain, with drivers concerned about the cost and limited availability of charging points and manufacturers worried about making expensive investments before the demand is there. "We could undermine the UK’s successful automotive sector if we don’t allow enough time for the industry to adjust," warned Mike Hawes, chief executive of the Society of Motor Manufacturers and Traders.

Hawes said there were only 12,000 public charging points in Britain and new power infrastructure would be needed, as well as steps to ensure the power network could cope with large numbers of people seeking to charge vehicles at the same time.

The Future Is Electric?

While many automakers may find it hard to countenance the end of the combustion engine, some have embraced a future where electric vehicles, or perhaps even driverless ones, prevail. This month, Volvo became the first major traditional automaker to set a date for phasing out vehicles powered solely by the internal combustion engine by saying all its car models launched after 2019 would be electric or hybrids.