Since Dawn arrived in orbit at Ceres in March 2015, scientists have located more than 300 bright areas.

Far from being a dead world, the dwarf planet Ceres is an active and evolving world, indicate hundreds of bright areas that stand out in images NASA's Dawn spacecraft has returned, say scientists. 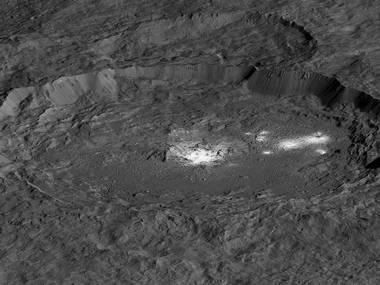 The bright areas of Occator Crater are examples of bright material found on crater floors on Ceres. NASA

The surface of Ceres is otherwise dark. "The mysterious bright spots on Ceres, which have captivated both the Dawn science team and the public, reveal evidence of Ceres' past subsurface ocean, and indicate that, far from being a dead world, Ceres is surprisingly active," said Carol Raymond, deputy principal investigator of the Dawn mission, based at NASA's Jet Propulsion Laboratory in Pasadena, California.

"Geological processes created these bright areas and may still be changing the face of Ceres today," Raymond said. The researchers presented the latest results about the bright areas at the American Geophysical Union meeting in New Orleans on 13 December.

Since Dawn arrived in orbit at Ceres in March 2015, scientists have located more than 300 bright areas. Ceres is the largest object in the asteroid belt between Mars and Jupiter and the only dwarf planet located in the inner solar system.

A new study in the journal Icarus, led by Nathan Stein, a doctoral researcher at California Institute of Technology divided Ceres' features into four categories. The first group of bright spots contains the most reflective material on Ceres, which is found on crater floors.

The most iconic examples are in Occator Crater, which hosts two prominent bright areas. Cerealia Facula, in the centre of the crater, consists of bright material covering a 10-kilometre-wide pit, within which sits a small dome.

East of the centre is a collection of slightly less reflective and more diffuse features called Vinalia Faculae. All the bright material in Occator Crater is made of salt-rich material, which was likely once mixed in water.

More commonly, in the second category, bright material is found on the rims of craters, streaking down toward the floors. Impacting bodies likely exposed bright material that was already in the subsurface or had formed in a previous impact event.

Separately, in the third category, bright material can be found in the material ejected when craters were formed, the study said. As Dawn continues the final phase of its mission, in which it will descend to lower altitudes than ever before, scientists hope to learn more about the origins of the bright material on Ceres and what gave rise to the enigmatic features in Occator.