The Honor 9 Lite's price hasn't been announced, but looking at the features on offer and the specifications, we expect it to be in the sub-Rs 20,000 range

Huawei is on a smartphone announcement spree. After launching the Honor 9i, Honor 7X and the Honor View 10 within a span of a month, one would assume the brand would take some time out — and maybe give us poor journalists a break. But no, they just had to go and launch another smartphone. 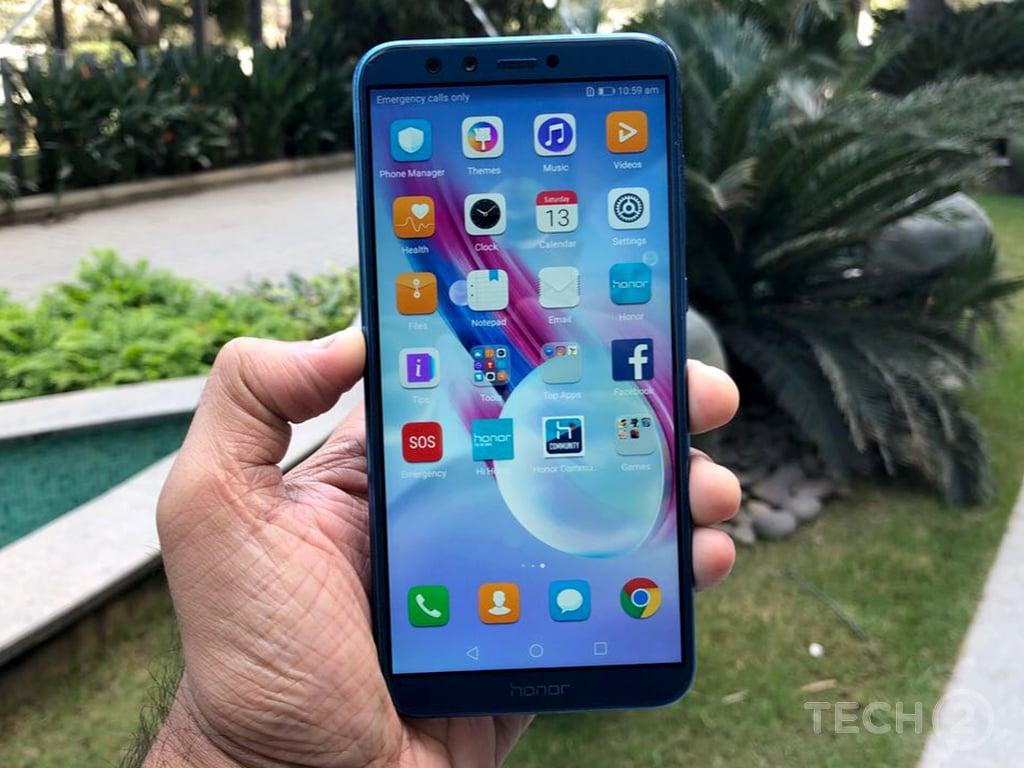 The Honor 9 Lite is quite the looker. Image: tech2/Nimish Sawant

Here are our first impressions of only the second Honor phone so far that sports quad-cameras.

The Honor 9 Lite borrows a lot of design elements from its siblings. This 5.65-inch, 18:9 aspect ratio, 2.5D curved display sporting phone has thin bezels on the right and left-hand sides. The Honor branding is noticed on the thin lower bezel. The top portion houses the dual cameras beside the tiny speaker section and the proximity sensor. The Honor 9 Lite comes with 2.5D glass on both the front and the back, separated by an aluminium frame. It measures around 7.6 mm thick. 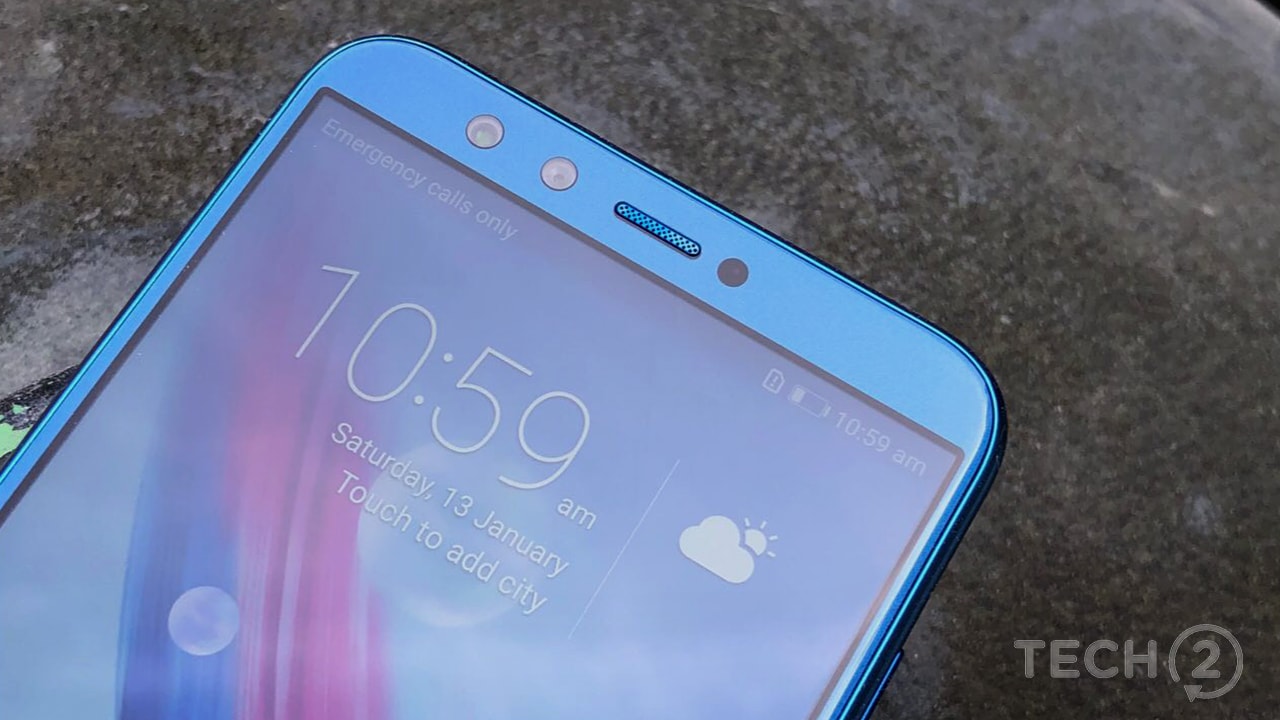 The phone borrows many design elements from its siblings. Image: tech2/Nimish Sawant

Turn the phone around and you notice some finesse, as compared to the Honor 9i, 7X and even the View 10. The camera bump that was prominently noticeable in all the other three phones isn’t very pronounced (although it does rise by just a millimetre from the plane of the rear side) on the Honor 9 Lite. The circular fingerprint sensor is at the top-centre portion and its matte finish makes it stand out in the glossy surroundings.

The glossy back stands out. For all practical purposes, it resembles a mirror as it is highly reflective. While I loved the Sapphire Blue colour variant as compared to the black and silver colour variants, the blue colour tends to attract a lot of smudges. These are easy to get rid of, unlike those on the metal back of the Honor 7X, but it can be annoying to constantly see smudges during your daily usage. The smudges are neatly masked on the silver backed Honor 9 Lite. 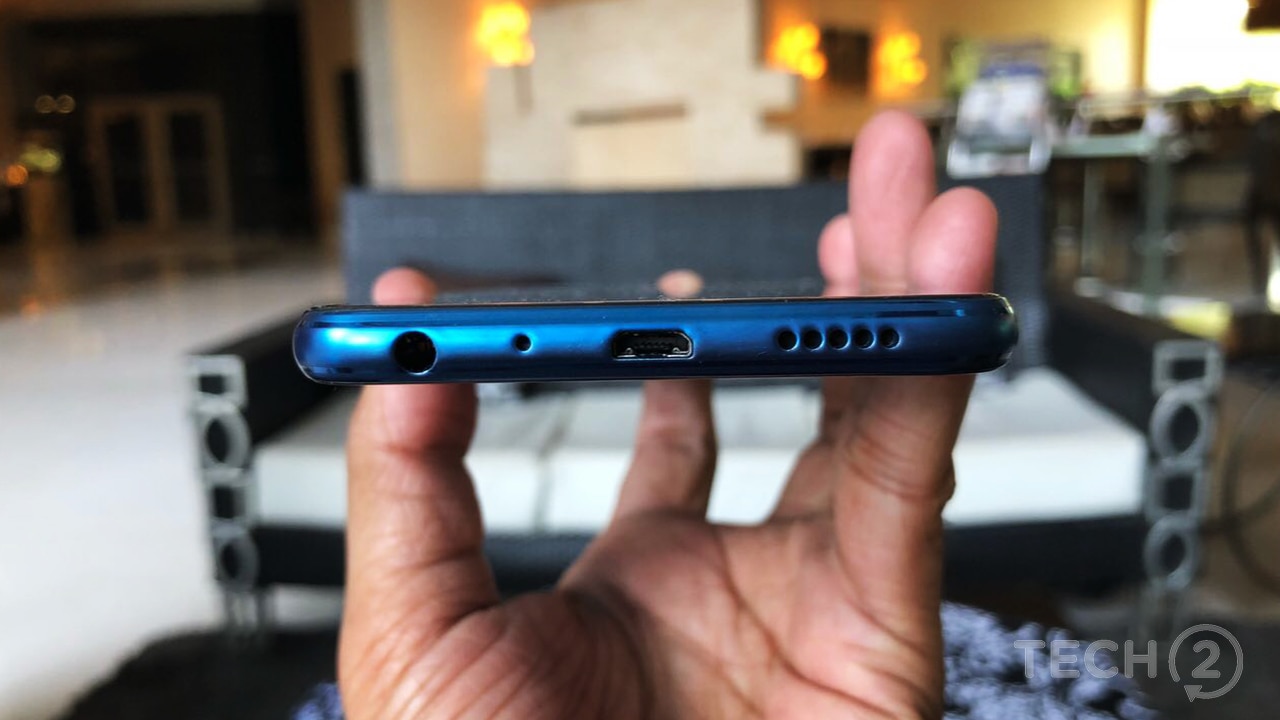 The phone has an aluminium frame with rounded edges, which gives it a sufficiently good grip. While the volume rocker and power/standby button are located on the right-hand side, the SIM card tray is on the left-hand side. The bottom edge hosts the 3.5 mm audio jack, a microUSB charging port and data transfer port and the speaker grille section. The phone fits quite well in the hand, although one-handed operation will be challenging. At 149 g it is quite light to hold.

Overall, the Honor 9 Lite is a good-looking phone.

While Honor has clearly taken dual-camera phones to heart (which might soon become quad-camera phones), it also appears to have embraced 18:9 displays. The last three phones we saw from Honor sported 18:9 aspect ratio display and the trend continues with the Honor 9 Lite. You get a 5.65-inch, 18:9 aspect ratio display with a resolution of 1080x2160 pixels, which gives a pixel density of 428 PPI. The 18:9 display is quite good. Image: tech2/Nimish Sawant

The panel is an IPS LCD and in the limited time I spent with it, I found the display to be quite decent. It can get quite bright, has good colour reproduction and has no noticeable colour shift when viewed from extreme angles. The text was sharp, and I noticed no pixellation.

Our review unit comes with 4 GB RAM and 64 GB storage, out of which around 53.6 GB is usable. There is a 3 GB RAM and 32 GB storage version of the same available as well. 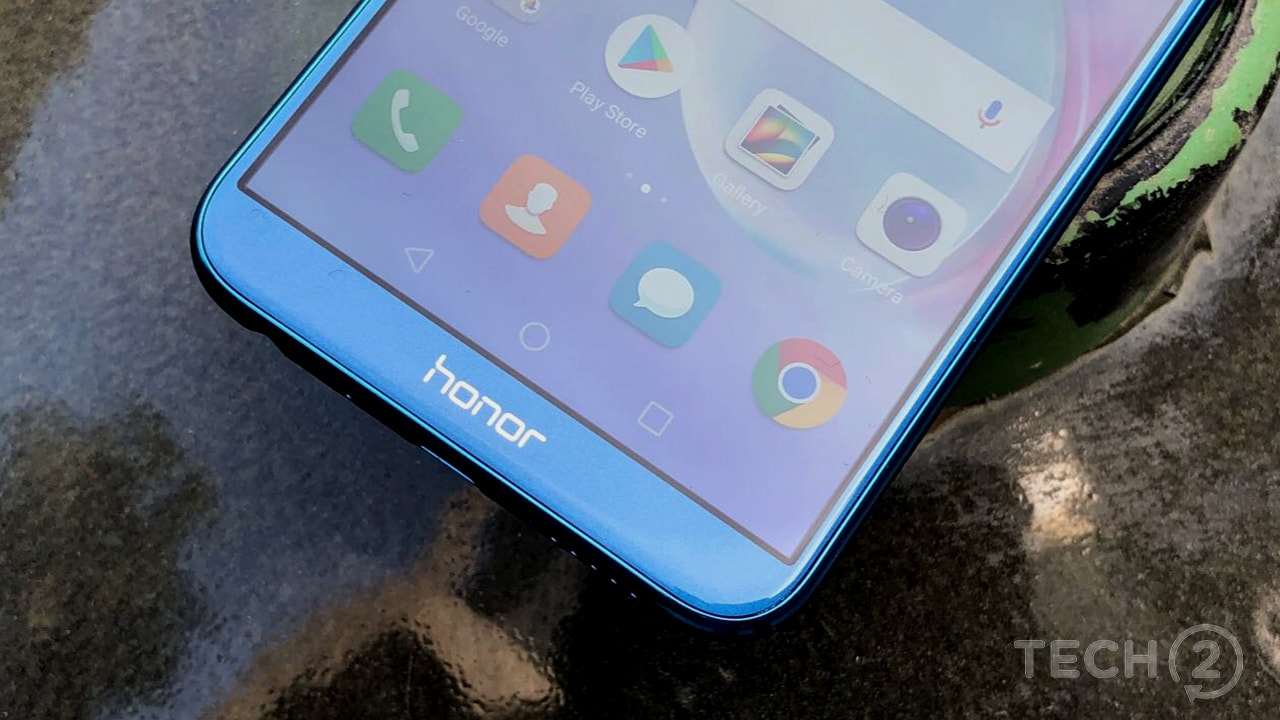 This is one of the few phones that will come with Android Oreo out of the box, albeit with some EMUI skinning. Image: tech2/Nimish Sawant

It must be noted that the Kirin 970 sporting Huawei View 10 has the full version of EMUI 8.0, which takes complete advantage of the chip’s neural network processing unit (NPU) to carry a lot of on-device machine learning tasks.

The Honor 9 Lite, which sports the Kirin 659 chipset, gets a light version of the EMUI 8.0, which does not have all the features that would be seen on the Kirin 970 chipset-supported phones. That said, the focus on on-device machine learning continues with the Honor 9 Lite, according to Huawei.

We have done a detailed analysis of EMUI 8.0 in our Honor View 10 review, so you can read up on that. We will attempt to enumerate the differences between OS variations in our upcoming review of the 9 Lite. Off the bat, I noticed that in the camera section, the object recognition feature wasn’t present. The phone uses an unusual dual-camera layout where one low-res camera is dedicated to capturing depth information. Image: tech2/Nimish Sawant

The Honor 9 Lite continues the quad-camera tradition started by the Honor 9i. You get a 13 MP + 2 MP setup for the front camera as well as the rear camera. The 13 MP camera is the one which does the heavy lifting, whereas the 2 MP sensor is meant for capturing depth information, thereby helping you get that much-wanted bokeh effect with ease. The aperture mode lets you adjust the depth before as well as after capturing the photograph. Both the front and rear camera pairs are capable of shooting FullHD videos at 30 fps. 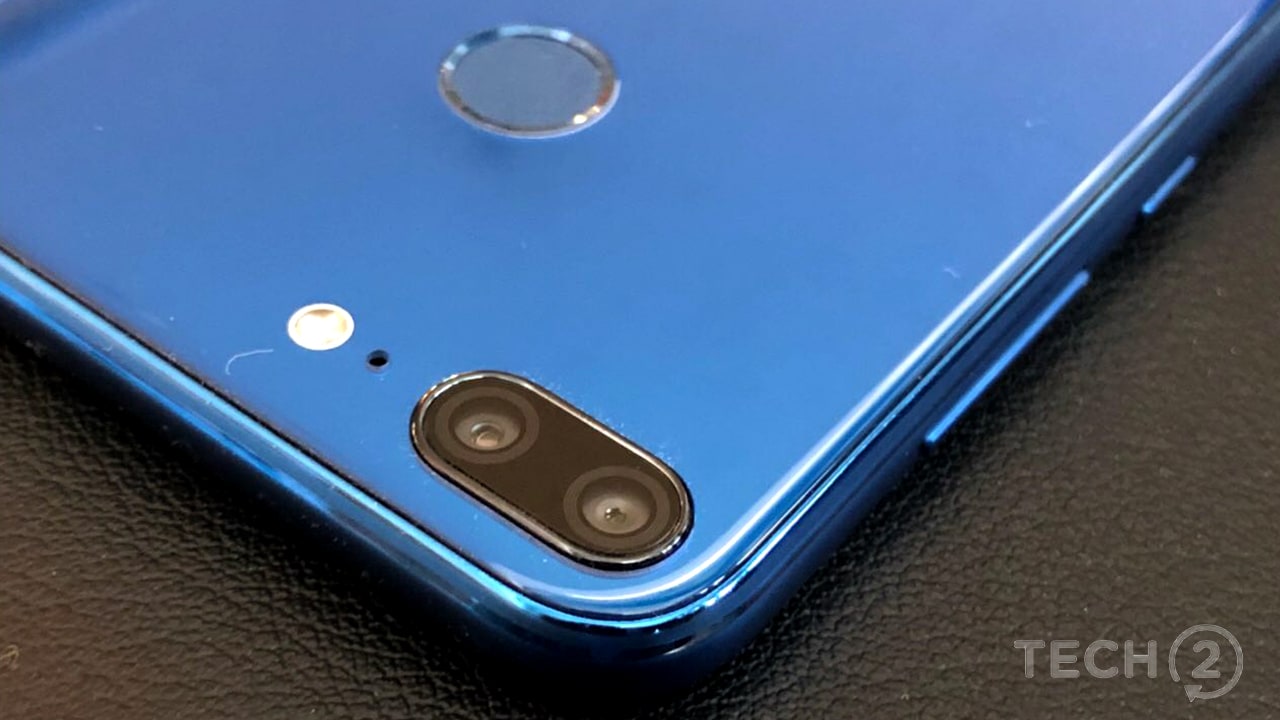 Unlike Huawei's most recent phones, the camera bump on the 9 Lite isn't so prominent. Image: tech2/Nimish Sawant

The user interface of the camera is quite straightforward. Swiping right brings up multiple modes such as Pro Photo, HDR, Panorama, Light painting among others. Swiping left brings up the settings menu. While trying out the camera indoors, I found the images to be a bit grainy. Outdoor daylight photos turned out well. But I will be doing a thorough testing of the camera during my review.

The Honor 9 Lite comes with a 3,000 mAh Li-Polymer battery which is non-removable. It supports Super Charge technology, which is Huawei’s fast-charging tech. But it comes with a microUSB 2.0 charging and data transfer port. This decision seems a bit odd in 2018 when USB Type-C should be mainstream.

The Rs 10,999 price point for the 3 GB / 32 GB variant is a disruptive price point which has the potential to redefine the budget segment. Xiaomi clearly has some competition on its hands in the sub Rs 15,000 space now.

Huawei has started 2018 with an interesting looking device, which seems to pack in all the features one expects from a mid-range Android phone. The four cameras, wonderful look and feel, an 18:9 aspect ratio display and Android Oreo 8.0 out of the box, are compelling features that are desirable for any Android smartphone buyer in 2018.

At Rs 10,999, Honor seems like it has a winner on its hands. The full detailed review will be out soon.