However, Oppo R15, followed by Vivo X21 were the most popular smartphones in China in Q2 2018.

While the smartphone market is declining in China for the fourth consecutive quarter in Q2 2018, Huawei’s upward journey seems unaffected.

According to the latest report by Counterpoint’s Market Monitor service, “Huawei was the fastest and lone brand registering a positive 22 percent year-over-year growth leading the market with an all-time-record share. Huawei’s sub-brand Honor also individually surpassed Xiaomi in overall volumes during the quarter, leading the e-commerce channel share as well.”

Reportedly, Honor captured over a fourth of the total smartphone sales during this year’s 618 festival that happens every year in June in China. The sale apparently boosted Honor and Huawei past Xiaomi. The report suggests that Honor alone is now a bigger brand than Xiaomi in China. 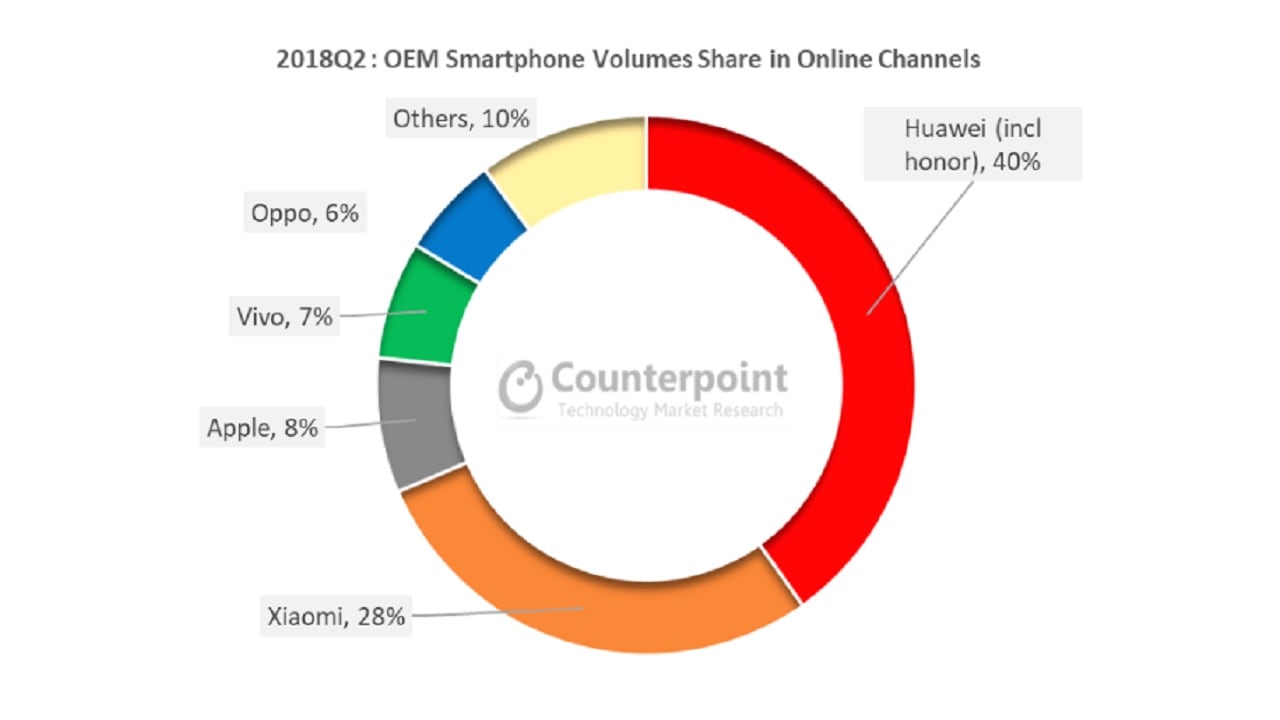 To top that, Xiaomi’s market share declined annually in China. “To expand its presence and grow market share in China, it has been ramping up its offline channel distribution in China, including launch of Mi Homes which will enable users to experience the Xiaomi portfolio. However, its impact on sales volume in the short term is limited.”

In the second quarter, Oppo and Vivo reportedly also expanded their presence in the premium segment with the launch of Find X and Nex respectively. Though, the premium segment always gets more competitive in the later part of the year with Apple’s refresh its portfolio, Huawei launching its Mate successor and Google announcing the latest Pixel phones.

Further, in Q2 2018, share of online sales for Apple grew both sequentially and annually due to comparatively higher discounts available online as compared to offline channels.

In China, e-commerce is apparently a key part of Apple’s channel strategy. Consequently, Apple was the third largest brand in terms of sales volume during the 618 festival. Apple iPhone X and iPhone 8 Plus surprisingly remained one of the popular and top selling models in China during Q2 2018.

Having said that, while Huawei, Honor and Apple did will over all in the Chinese market, the top selling smartphone in China in Q2 2018 was Oppo R15, followed by Vivo X21. iPhone X, iPhone 8 Plus and Honor 7C scored the last three ranks in the top five popular models in China is the quarter.

Oppo Find X3, Find X3 Pro to globally launch on 11 March: Everything we know so far