The HTC Vive Pro VR headset will be on sale throughout 2018 with only standalones on sale for the time being, with full bundles arriving later in the year.

Having released the Vive more than two years ago, HTC decided to up its VR game at CES 2018 with the launch of the HTC Vive Pro VR headset. The new VR headset by HTC offers a number of interesting upgrades that could see a wider adaptation of the device among VR content consumers. 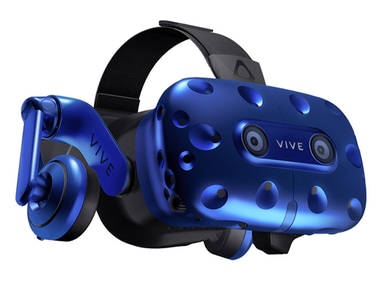 The HTC Vive Pro VR headset looks to address a number of complaints users had of the previous Vive headset and tops it up with a few extras that should set the competition up for other consumer VR wearable manufacturers. The head strap has been reworked on and now includes a sizing dial that helps hold the headset into position. The new headset also includes built-in headphones which are key to ensuring that there are fewer wires to take care of.

HTC has increased the resolution on the dual-OLED displays of the headset to 2880 x 1600p, with a pixel density of 615 PPI. This is a considerable jump (78 percent) from the 2160 x 1200 resolution of the 2016 Vive. This jump in resolution also puts it above competitors like the Oculus Rift and even above Window's Mixed Reality headsets.

That's not all. HTC has also gone and thrown in dual-microphones and dual front-facing cameras which are meant for developers to take advantage. The images reveal a tidier package this time around with a distinctive design and the blue colour scheme chosen by HTC.

The new Vive Pro VR is also backwards compatible with both SteamVR tracking 1.0 and 2.0.

As per the company, the Vive Pro VR will be on sale throughout 2018 with only the standalone model on sale for the time being, with full bundles arriving later in the year.

Pricing details have not been revealed yet, but HTC has mentioned that they will be out soon.