Honor is set to launch—Honor Play and Honor 9i—at an event in China on 6 June. It is not certain if it will launch them globally as well, like the Honor 10 which was globally launched recently, after it was launched in China in April. 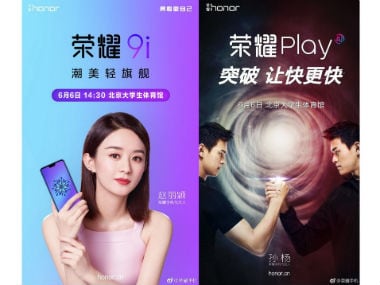 Honor will launch Honor 9i and Honor Play. Weibo.

According to the two posts on Weibo, the Chinese smartphone maker will launch the smartphones at the Beijing University Gymnasium.

Honor has claimed that it is bringing 'breakthrough technology' to its Honor Play which is expected to have AI capabilities. The post speculated that it could be Honor’s flagship phone in China.

The listing also mentions that the phone has three cameras. It is expected to have a dual camera setup (13 MP+ 2 MP) and a 16 MP front-facing camera.

The phones might come in three colour variants— blue, gray and black.