Previous leaks have shown that The Honor Magic 2 will be using an AMOLED display.

Following the Oppo Find X and the Vivo Nex, several smartphones look to be moving in the direction of putting in mechanical sliders inside their smartphones to house the selfie camera. The latest in the line to do this is Honor with its upcoming smartphone Magic 2. While the device is said to be announced on 31 October, it looks like the company itself has outed a couple of teaser images of the smartphone. 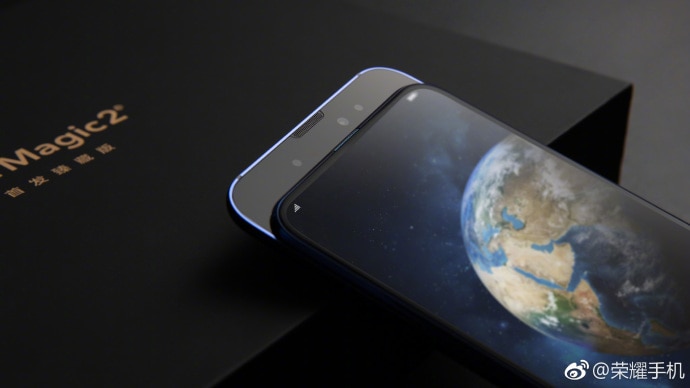 The images shared on the company's official Weibo account show the box and the smartphone itself in what appears to be two colour variants.

The phone is seen to be sporting a triple camera system on the rear, which is quite similar looking to the Huawei P20 Pro. As a matter of fact, the device's dual-tone Blue and Purple gradient colour variant also are also very P20 Pro-like. 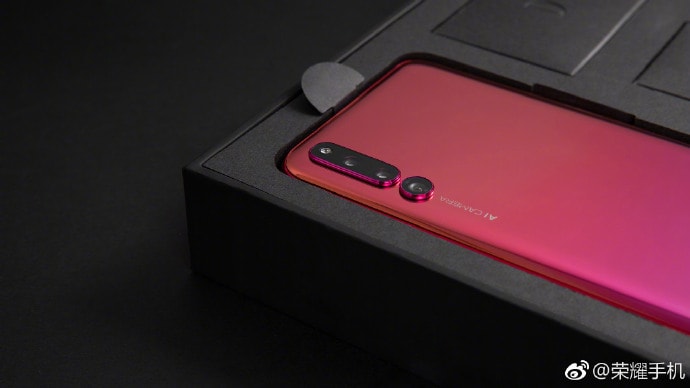 The phone looks to be having close to no bezels on the top with a mechanical slider popping out from behind, housing the selfie camera and other sensors which are presumably for 3D Face recognition.

The bottom half of the phone is not visible in the photos, but we can assume that there will be a minimal chin if any, present. There is also no fingerprint sensor anywhere so we can assume that it is either under the display or like the Find X, there is going to be no sensor at all. Previous leaks have shown that the Honor Magic 2 will be using an AMOLED display which will mark the first time that the Honor brand has used such a display. Not only will it be bezel-less, but the resolution of this display is also touted to be 1440×2880 pixels resolution at a pixel density of 537 ppi.

Inside, we are expected to find that the Honor Magic will be powered by Huawei's flagship Kirin 980 chipset introduced earlier at IFA 2018.

It will also be bundled with a ‘Magic Charger’ that would give an output of 40W and this fast charging feature will only turn on battery, cable, and charger are identified as safe.