The doodle celebrates German engineering and ingenuity, as the basic design for the hole puncher has remained constant for 129 years.

Google has replaced its logo with an animation commemorating the 131st anniversary of the punching machine, also known as the hole punch or hole puncher. On 14 November, 1886, Friedrich Soennecken filed a patent for the hole puncher. Soennecken was the son of a blacksmith, and invented the hole puncher, along with a binder and a special nib for ink pens that was suitable for calligraphy. Soennecken is now a German company that makes office supplies, and images of its early products are available on this archived web page. 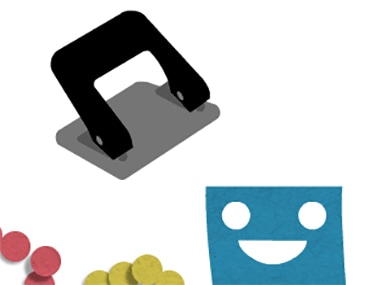 The doodle celebrates German engineering and ingenuity, as the basic design for the hole puncher has remained constant for 129 years. Variations of the machine are commonly found in offices today, even in the digital age, and is not likely to change much as long as humans continue to use paper.

The doodle also celebrates the small round pieces of paper that are a byproduct of the punching process, with the Google logo formed from these waste pieces. The animation shows a sheet of paper doing a little jig after being punched.

The reach of the doodle is across Europe, North America, Brazil, Australia, New Zealand and India. The doodle has been created by Gerben Steenks.

India celebrates children's day today, and Google had been hosting a competition that showcased interpretations of the Google logo by children from India. Google had been holding the Google 4 Doodle competition every year since 2010, till the hole punch doodle this year. The previous Google Doodles for 2010, 2011, 2012, 2013, 2014, 2015 and 2016 by Indian children can be found on the Google website.