According to HMD Global the 3G version of the Nokia 3310 will retail at a global average price of €69, which is approximately Rs 5,325.

HMD Global has announced a 3G variant of the 2017 Nokia 3310, and has indicated that the device will be available from mid October in Australia. The 3G functionality has been added because of such a demand from Nokia fans around the world, which hints that the device may be available soon in other markets as well. According to HMD Global the 3G version of the Nokia 3310 will retail at a global average price of €69, which is approximately Rs 5,325. 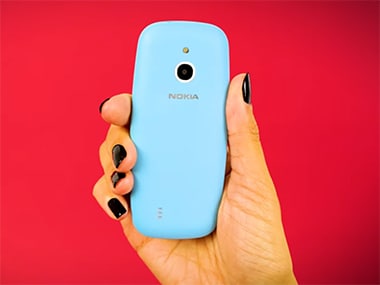 Juho Sarvikas, Chief Product Officer, HMD Global says, "Our reimagining of the Nokia 3310 has been a global and cultural phenomenon. In a world dominated by smartphones, the mix of nostalgia and a beautiful phone that just keeps going has captured people’s imagination. Our fans around the world have been asking for this iconic phone to support 3G. Fans asked, we listened, and today welcome the Nokia 3310 3G."

There are some slight UI and hardware tweaks to improve the usability. The icon colours can now be modified with themes, and the placement of the icons can be changed according to the preference of the users. The device has been ergonomically redesigned, with the keys now slightly wider apart to make typing easier. The new keypad is also now silver in colour. The Nokia 3310 3G has a talk time of 6.5 hours and a standby time of 27 days.

Users can use Twitter and Facebook on the device, as well as install games and applications from the Opera and Gameloft mobile application stores. Of course, the device has the re-imagined version of Snake. The device will be available in four colours, Yellow, Warm Red, Azure and Charcoal.

We would really like to see the device support 4G connectivity, however.

Nokia 3310 in a 3G variant listed on a Swedish website; HMD Global does not confirm

Nokia 3310 2017 Review: If nostalgia is what you seek, you are better off getting the original

Nokia will make its new Android smartphones in India, to hit stores in June