However, throughout the length of both the hearings, Facebook CEO, Mark Zuckerberg responded to a number of questions with promises to get back. Facebook CEO Mark Zuckerberg testifies before a Senate Judiciary and Commerce Committees joint hearing regarding the company's use and protection of user data. Reuters

During the combined 10 hours of questioning, it seems like Facebook came out relatively unscathed from the somewhat gruelling questions.

Zuckerberg did a relatively good job at pushing back some of the more controversial topics during the house hearing and courted a number of basic questions at the Senate hearing. What is interesting is that Zuckerberg was successful in sidestepping and not committing to any concrete measures. We have already covered the major points from both, the Senate hearing and the House hearing.

However, throughout the length of both the hearings, Zuckerberg responded to a number of questions with a number of promises. He continued to answer the questions promising that his team with follow up with the lawmakers. Most of the promises focused on existing provisions that Facebook has already announced previously. We have made a list of 13 of the most significant promises that Zuckerberg made to US lawmakers.

Facebook CEO promised that he would get back with answers if Facebook finds any new cases of transferring the user data while breaching the terms of service for the platform. He also promised that Facebook will provide information about how many developers outside Facebook have audited the data.

Zuckerberg also pointed out that he will follow up with the exact number of fake accounts that the social media giant has removed from the website. This is likely to reaffirm that Facebook is doing everything to fight against automated bot accounts that were responsible for spreading false information and news.

On being asked if Facebook employees worked with Cambridge Analytica to help Trump’s campaign during 2016 presidential election, he added that he will check if anyone from the company was involved. 4. Tracking minors and gathering their data

He repeated with a similar answer when a lawmaker asked him if Facebook collected details of texts and calls from minor users including the time when they were not logged in to their Facebook accounts.

Zuckerberg responded that he would get back with an answer when quizzed if the technology industry should be regulated. He added in a separate instance that regulation is inevitable and Facebook was open to regulation if done in the right way.

6. Collecting data from devices that are not logged in with social media accounts

Almost like a habit, when asked if Facebook collects data from devices where users have not logged in to their Facebook accounts, Zuckerberg retorted to stating that he will get back with an answer.

Lawmakers asked him if he would return to Congress to support the Honest Ads Act pushing for a law to enforce ads that don’t mislead people by false claims, the Facebook CEO added that he would get back to inform if he would personally visit Washington to support the act, or delegate the work to his team.

Facebook announced its new data bounty program days before the Senate hearing. Lawmakers inquired if the program also included investigation on unauthorised access to user data. He added that he will have to get back after confirming if the company was covering unauthorised access. 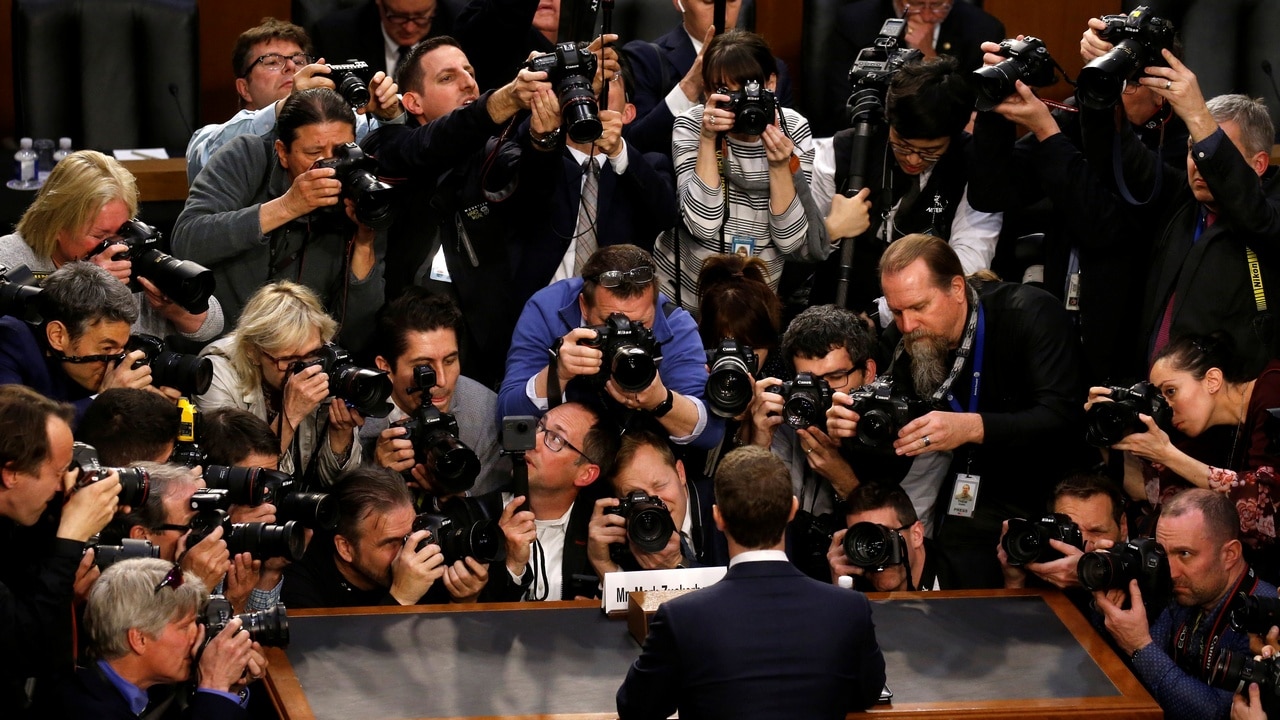 Zuckerberg added that he will get back with an answer on being questioned about the artificial intelligence tools and algorithms that Facebook is using to combat misinformation and the number of fake accounts.

Lawmakers also questioned how Facebook would offer European data protection rules (GDPR) for its users in the United States. Following almost as a script, he repeated that he will have to get back with the details.

The Facebook founder was unable to answer about what data was mined for security purposes and if that data was sold. He added that he will get back with a response on the details and if anyone from Facebook was responsible for censorship of video content creators who supported Trump. A Facebook logo reflected in the eye of a woman is seen in this picture illustration taken in Skopje November 6, 2014. Picture take November6. Image: Reuters

12. Diversity in the technology industry

He repeated the same response while answering a question about how to improve racial diversity in the industry. He went on to add that he will revisit the idea of meeting top tech CEOs about boosting the diversity.

13. The amount of data that the social media network collected on non-Facebook users

On being asked if he knew what data Facebook was collecting on users that don’t have a Facebook account, Zuckerberg replied that he was not aware of the amount of data collected and would get back with more details.