The extended tunnel will be running between 22 to 44 feet below the surface of ground and have an external diameter of 13.5 feet and internal of 12 feet.

Back in December 2016 when Elon Musk tweeted that he was fed up of LA traffic and planned to "build a tunnel boring machine and just start digging", a lot of people didn't take him seriously. However, within no time we heard the announcement of 'The Boring Company' founded by Elon Musk himself. His objective was to build a large network of narrow tunnels many levels deep. He plans to place electric skates in these tunnels, which will transport vehicles from one place to another at speeds of 125 mph (around 200 kph) and reduce traffic on the surface of big, metropolitan cities. 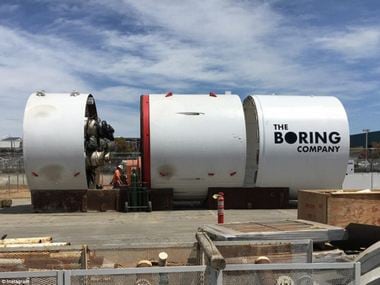 However, the ride wasn't as smooth as expected and so far, Musk has managed to dig only in private property at SpaceX's HQ in Hawthorne, California. But now the City Council of Hawthorne has granted Musk the permission to dig a two-mile underground tunnel, according to The Daily Breeze, which will extend beyond the SpaceX  property. The council voted on this decision with four in favour for the tunnel and one against.

The extended tunnel will be running between 22 to 44 feet below the surface of the ground and have an external diameter of 13.5 feet and interior diameter of 12 feet. The tunnel will be started under the SpaceX compound's parking lot and extend to the Hawthorne Boulevard, according to LA Curbed. According to The Verge, the planned route steers clear of any residential or commercial property that is not already owned by SpaceX. Musk later plans to extend this tunnel all the way to Los Angeles International Airport as well.

The Boring Company plans on monitoring the progress of the tunneling very closely and will stop the drilling if the surface caves in by even half an inch above the tunnel, according to The Daily Breeze.  “You don’t see it, don’t hear it, and certainly don’t feel it. Everything happens underground. We won’t have construction crews walking down the street. We won’t have excavators” said Brett Horton, SpaceX’s senior director of facilities and construction to Daily Breeze.

Although Musk's idea is not impossible, the biggest obstacle for him is the drilling cost of tunnels. A single-lane conventional tunnel is about 28-feet wide and he estimates the cost for building it to be around one billion for a single mile. However, Musk plans on making his tunnel's diameter nearly half that of a conventional single lane tunnel. This might reduce the cost of the tunnel by three to four times, according to his estimate. All the information comes from the official site for The Boring Company. In any event, there will be many such hurdles to cross before Musk can provide a functioning prototype with his Boring project which will have real world applications.