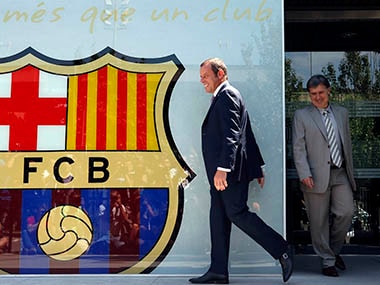 According to a report in The Goal on 23 August, the hacker group falsely announced the signing of Angel Di Maria from Paris Saint-Germain Football Club.

"It had been a trying for 24 hours for the Blaugrana, as on 22 August the club announced they were suing Neymar after alleging the Brazilian failed to fulfil his agreement with the team," the report noted.

For an hour, the club kept deleting the tweets while "OurMine" kept re-posting them again and again. The group also attempted to get the hashtag #FCBHack trending on the Twitter.

The hacker group is known for breaching into high-profile figures and companies' social media accounts, including, those of HBO.

Though "OurMine" claims to be a security group, its official website describes the group as "an elite hacker group known for many hacks showing vulnerabilities in major systems."

They have also not spared websites like Variety, TechCrunch and BuzzFeed. A report in Wired in July quoted an anonymous member of the group saying that their string of tech executives' embarrassment "is only its way of teaching us all a helpful lesson".