It has been observed that the bigger a galaxy, the size of the black hole increases. Thus the merger of the blackholes happens for a short time.

In a research done by the NASA, it has been predicted that in the next ten years, scientists might be able to detect gravitational waves from at least one black hole binary. Thus, answering the questions regarding the formation of a galaxy. 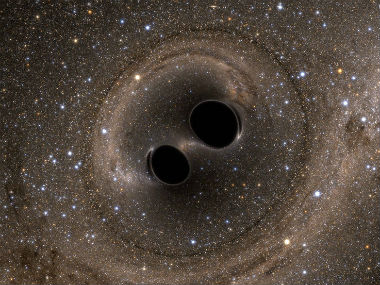 These supermassive black holes are said to be 100 million times bigger than the Sun. These black holes which spiral towards each other to create low-frequency gravitational waves which are known to sound equivalent to 'bass singers’.

The pulsars are basically remnants from galaxy explosions or "dead" galaxies.

Whenever two galaxies collide their dark supermassive hole spirals to form to merge with each other. However, their movement creates friction in the space-time which emits these gravitational waves. These gravitational waves are caught by the ever emitting pulsars. These abnormalities are caught by the researchers as the distortion shifts the Earth's position as well, though slightly.

“By expanding our pulsar timing array over the next ten years or so there is a high likelihood of detecting gravitational waves from at least one supermassive black hole binary”, said Chiara Mingareloo, who worked on this research while she was in Caltech.

Nasa predicts that the collision between the Milky Way and Andromeda, the nearest galaxy to the Milky Way, will take 4 billion years.