Clay Bravor said, that the data ranges for this kind of OLED display could be between 50-100 Gb/sec with the current rendering configuration. 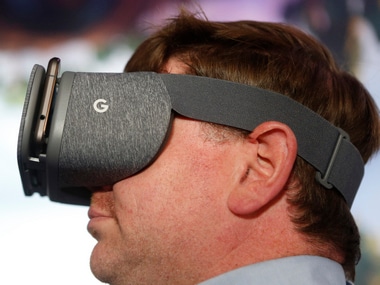 A member of the media tries out the Google Daydream View VR headset. Reuters

Clay Bravor, Google's VP for AR/VR had reportedly said last year that the company had "partnered deeply with one of the leading OLED manufacturers in the world to create a VR-capable OLED display with 10x more pixels than any commercially available VR display today,". This year, it looks like Google will explain this OLED display in greater detail.

9to5Google's report states that Google is announcing an 18 megapixel, 4.3-inch OLED display with “wide-field-of-view at the Display Week conference on 22 May. However, putting up such display in a VR headset will come with an unprecedented amount of power usage.

Bravor said, as per a report by RoadtoVR, that data ranges could be between 50-100 Gb/sec with the current rendering configuration. To counter this, Google will be relying on a technique called as foveated rendering which relies on an eye tracker integrated inside the headset to reduce the rendering workload. However, it's not clear as of yet when Google will make this display ready for consumer use.