Google's birthday surprise: Next version of Android to be called KitKat

Forget about the KeyLime Pie folks. The name of the next version of Android is out and its called KitKat. Yes, as in the chocolate by Nestle.

Forget about the KeyLime Pie folks. The name of the next version of Android is out and its called KitKat. Yes, as in the chocolate by Nestle. Incidentally Google also turns 15 years old today.

Android chief Sundar Pichai announced the name in a post on Google Plus. He also confirmed that Android has crossed over 1 billion activations. Great news. And version 4.4 will be called KitKat.

I'm excited to share that together we've now passed 1 Billion Android device activations. Huge thanks to the entire Android community from the hardware manufacturers, chip makers and carriers to the developers and content creators to all of you - our Android users around the world - for making this possible.

On my return from Asia, I was also thrilled to find this guy waiting to greet me on the front lawn -- love the new #AndroidKitKat statue and can't wait to release the next version of the platform that is as sweet as the candy bar that's one of our team's favorites:) 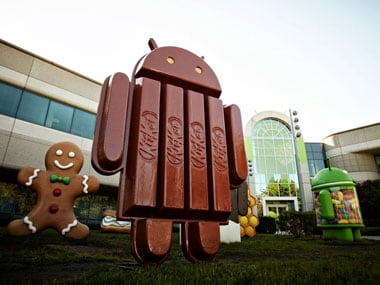 So there you have it. From Cupcake to Jelly Bean we now have KitKat. KitKat will be Android version 4.4 and not Android version 5. Google has also created a landing page for Kitkat which you can check out here.

So why did KeyLime Pie get the boot? More importantly did Nestle pay Google or is Google paying Nestle for using the name KitKat?

Google told the BBC there's no money involved. "This is not a money-changing-hands kind of deal," John Lagerling, director of Android global partnerships, said. Keylime Pie got the boot since the powers that be at Google realised that not too many people knew the actual taste of a Keylime pie.

Nestle has also issued a statement on this partnership with Google with Patrice Bula, Nestl's Head of Marketing, saying, "We're excited to announce this partnership with Android, the world's most popular mobile platform, which will help us to enable even more Kit Kat fans to enjoy their break. Kit Kat is one of the world's top ten fast-moving consumer goods brands in social media in terms of fan numbers and engagement. We continue to build on its strong digital presence with interactive, creative branding campaigns."

To mark the release of Android KitKat, more than 50 million specially branded Kit Kat bars will be available in 19 markets including India. The packs will lead consumers to the website android.com/kitkat where they will have the opportunity to win prizes including a limited number of Google Nexus 7 tablets, and credits to spend in Google Play Store. Oh and if you're really lucky you might win an Android robot-shaped like a Kit-Kat bar. We're guessing it will be edible.

Nestle also has a rather cheeky video on the launch of Android KitKat. Watch video below

Admittedly, Google has pulled a fast one over a lot of tech blogs and media which had seen Key Lime Pie as pretty much a confirmed name. Hopefully what Android KitKat offers will leave users and Android fans also surprised...in a good way.

Let us know in the comments, if you like the sound of Android KitKat or do you think it will be a branding disaster.