Instead of just responding with text, Google's feature lets celebs respond in the form of pre-recorded selfie-videos which will show up at the top of the mobile search.

Google is adding a new feature to its search engine which will let celebrities answer common questions about them that are searched the most. But instead of just responding with text, Google's feature lets celebs respond in the form of pre-recorded selfie-videos which will show up at the top of the mobile search. 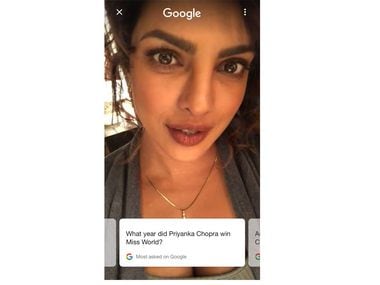 For instance, if you want to know how many languages Priyanka Chopra can speak fluently or where she grew up or how to get hair like her and more, she will have video responses to these questions. Other celebrities such as Will Ferrell have even answered quirky questions such as how one can audition for Saturday Night Live and told a dad joke.

The questions seemed to be the 'Most asked on Google' or 'Trending' topics or asked by a 'Google Fan' and so on. Instead of just getting a text search result, Google has actually gone ahead and got celebrities to respond via pre-recorded videos. This feature certainly adds a lot more personal touch to the questions being asked. It also brings out the quirky side of the celebs.

Wired has a popular series where celebrities answer the most searched questions about them. Google seems to have certainly taken an inspiration from that.

The video responses only show up in search results though, and it does not lead to any YouTube link or any external video player. Also it shows up only on mobile search and not on a desktop browser.

In its blog post, Google has said that they have a list of celebrities to start with and more will be added. "We’re piloting this feature on mobile with answers from Priyanka Chopra, Will Ferrell, Tracee Ellis Ross, Gina Rodriguez, Kenan Thompson, Allison Williams, Nick Jonas, Mark Wahlberg, James Franco, Seth MacFarlane, Jonathan Yeo and Dominique Ansel."

So if you are a fan of any of the mentioned celebs, go ahead and try out the feature on your mobile search app or browser.

Eid al-Adha 2021: Date in India and Saudi Arabia; know the significance of this festival