Google said it will extend it's headquarters in the capital to accommodate the centre — the third to open worldwide, after California and Switzerland.

Google on Monday announced it will open a research centre in Paris devoted to artificial intelligence, following a meeting between the tech giant's boss and French President Emmanuel Macron. 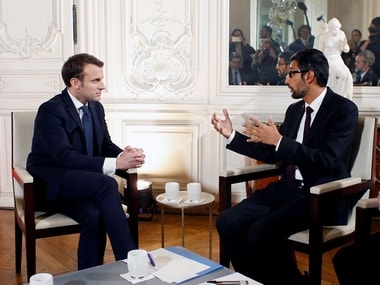 "The different achievements in this country, including in science, art and the academic field make it an ideal place for the creation of a centre of theoretical research in artificial intelligence," Google chief executive Sundar Pichai said in a statement.

The announcement came as Macron welcomed 140 multinational business leaders to Versailles in Paris on Monday night, ahead of the opening of the World Economic Forum in Davos on Tuesday.

Google said it will extend it's headquarters in the capital to accommodate the centre — the third to open worldwide, after California and Switzerland.

Facebook earlier announced its intention to double the number of researchers at its own AI centre, opened in Paris in 2015, from 30 to 60.

The announcements "signal the competitiveness of France" in the growing sector, the Elysee Palace said in a statement.

Both companies intend to open programmes in France to help train tens of thousands of people in digital skills.