Google testing Material Design for Chrome, you can try it out on Canary build

The redesign adopts Material Design big time, with changes to everything from tabs to buttons.

In the past few months, Google has been rolling out various small updates to Chrome, in the run-up to ultimately launch its biggest redesign ever.

Google Chrome is going big on Material Design, with new tab shapes, single tab modes, among other changes. And the good news is that you can try it out right now.

The redesign is currently available on the Canary build for Windows, Linux and Chrome OS. So if you want to try the new design for Chrome, you can install Canary. For the ones unaware, Canary is an experimental version of Chrome, which has the latest features in development.

Also, you must note that since Canary is essentially aimed at developers and early adopters, it comes with its own risks. The software could crash anytime, and you may stumble upon bugs.

If you’re a Mac user, you can try setting experimental flags chrome://flags/#top-chrome-md to “Refresh” and enable chrome://flags/#views-browser-windows. Type those two strings into the search bar at the top of your browser and you’ll be automatically redirected to the page where you can change the settings.

Back to the Chrome redesign, the changes were reported by a user on Google+, François Beaufort, who describes himself as the ‘Chromium Evangelist’ it was first spotted by Engadget. 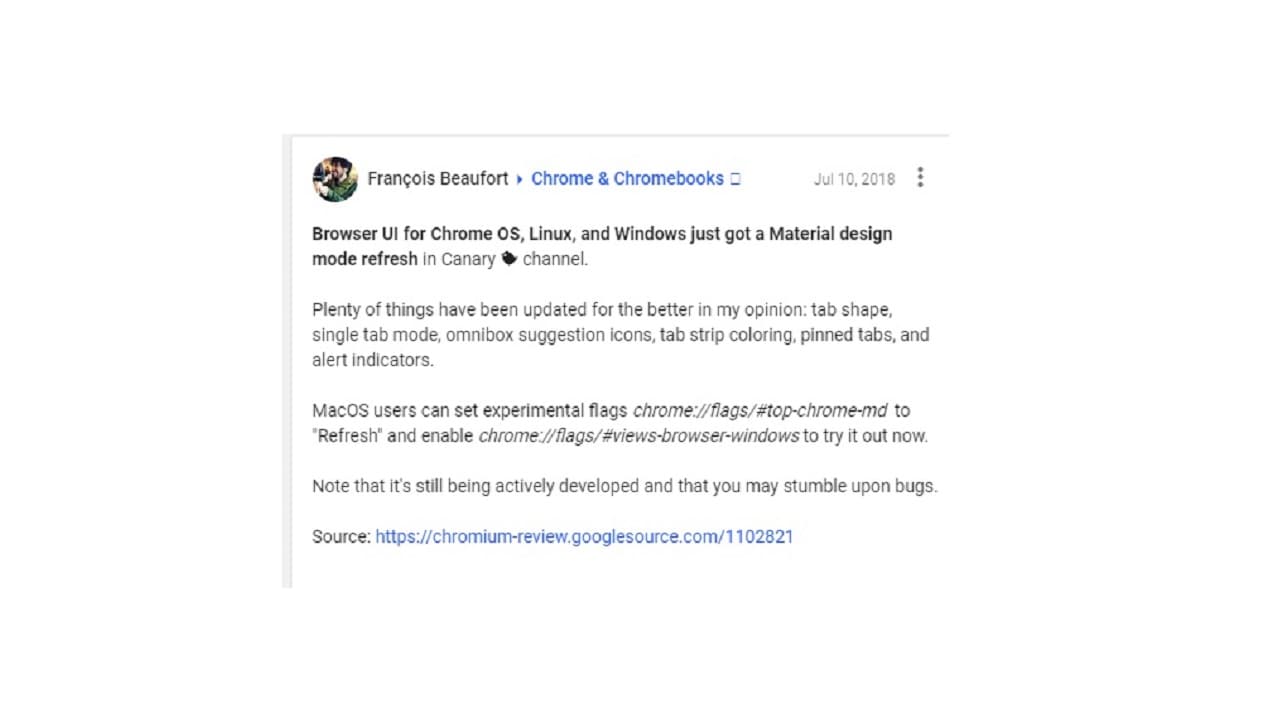 The Google evangelist revealed that the latest Canary update would come with changes like “tab shape, single tab mode, omnibox suggestion icons, tab strip colouring, pinned tabs, and alert indicators.”  According to Beaufort, a lot of things have been updated and look better.

Now, this isn’t exactly the first time that Google has made any changes to Chrome’s UI, but the one that has now come to Canary, is apparently the most significant ever. The last big update we saw on Chrome was ten years ago in 2008. It is easy to tell from the sliver of the image that was shared by François Beaufort, that the tabs, the address bar, the buttons are all very different now. If I may say, it looks so much shinier and neater.

But, we also want to just leave you with our first thoughts on seeing the redesign: It reminds us a lot of the current Firefox browser.