Google's replacement for Chrome apps will come in the form of what it refers to as PWAs or progressive web apps which are available in Chrome for Android.

Google had announced back in August 2016 that it would end Chrome apps across Windows, Mac and Linux platforms citing the reason that less than 1 percent of users were using them. While Google did mention at the time that it might take them up to Q1 2018 to strip out the program completely, the company has shut down the "app" section present previously on the Chrome Web Store. 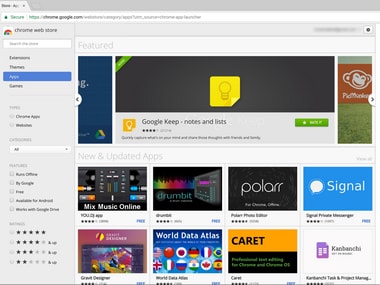 Google is yet to make an official statement but it has removed the 'Apps' section from Chrome and has started emailing developers about the same, leaving only the 'extensions' and 'themes' tab to choose from. According to a report by Ars Technica, Chrome applications which are already installed by users will continue to function for the time being but will be phased out come Q1 2018.

To get the confusion out of the way, Chrome Extensions, which include a store full of plug-ins for the browser, are not going anywhere. These extensions, also available through the Chrome Web Store will be right where there were accessible from previously.

As explained in the report, there were two broad types of Chrome apps available to users. 'Packaged apps', which were the more powerful applications which were capable of running in the background and could access ports on the device. The other category of apps were 'hosted apps'. Hosted apps function mostly like webpage bookmarks which could be conveniently pinned across parts of the user interface. Both app categories will now be accessible only on Chrome OS and not the desktop.

Google's replacement for Chrome apps will come in the form of what it refers to as PWAs or progressive web apps. These applications which are already being rolled out for Chrome on Android and will function more like full-fledged applications with push notification capabilities and an installable app icon.