Google Pixel 3a XL camera comparison: Trumps the competition by a mile

Optimising its imaging algorithms to work on low-end hardware seems to have paid off for Google.

While Google was more than happy to announce its affordable Pixel smartphones, the new devices were not exactly well received in India, given its premium segment pricing. Still, as I concluded in my review, the plastic-bodied Pixel 3a XL is still well worth its Rs 44,999 price tag given that users will get the latest software updates on time and the best camera in that price segment as well.

My review of the Pixel 3a XL focused more on the smartphone as a whole, so it’s time we zoomed in and took a closer look at the details.

For this comparison, I picked up smartphones that are priced similarly (no matter how old) so you get an idea about what manufacturers get you at this price tag. In the test I used a Pixel 3 with its faster processor, the OnePlus 6T (McLaren Edition) because it is the smartphone that it will be compared with, primarily because of its price, and the Apple iPhone 7 (starts from Rs 38,000) because it is the only iPhone available in the sub Rs 45,000 price range.

If you were wondering how the premium Pixel 3 fits in? Well, it’s all because I wanted to know what’s the difference between the two.

This is more so after Google VP for Product Management, Sabrina Ellis confirmed that the 3a’s algorithms were developed and fine-tuned by a separate team.

With the Pixel 3a series actually featuring the more fine-tuned algorithms to keep up with the mid-range hardware inside, (that helped bring down the smartphone’s price among other things) it will be interesting to see how similar they are and how big of role software plays in smartphones these days.

So let’s jump right in!

The Pixel 3 delivered the most flawless portrait shots, with the Pixel 3a XL coming in second. Both photos showcased a similar level of detail, but I preferred the Pixel 3 here because the 3a from the same distance showed me a cropped view of the subject, meaning I had to step back quite a bit to get a frame similar to that of the Pixel 3.

Google's Pixel 3a clicks the best Portrait photos in its class. (Click to expand) L to R: Pixel 3a XL, OP6T, Pixel 3, iPhone 7

Surprisingly, the iPhone 7 got a better photo than the OnePlus 6T despite not having a portrait mode. The details were a lot clearer than the OnePlus and the image was a bit flat but still more detailed than the one I shot on the OnePlus. The output from the 6T looked a bit dreamy.

Selfies similar to the Portrait mode come out quite detailed on the Pixel 3. The edge detection is the best that you can get but it’s not exactly consistent. Still, it is impressive how Google’s imaging algorithms expose the subject and the background really well, save for the dynamic range, which still falls a wee bit short against the OnePlus 6T.

The Pixel 3 and 3a XL delivered the most realistic looking Portrait selfies (Click to expand). L to R: Pixel 3a XL, OP6T, Pixel 3, iPhone 7

The Pixel 3a XL and the 6T battle it out here, but the OnePlus has fewer errors with its blurry edge detection. The 3a, however, exposed the scene the way it appeared. If you look closely, the Pixel 3a XL has an issue with edge detection and shows a minor halo-like effect from my neck to my shoulders. I have noticed this across some selfies and is hopefully a software issue that Google is able to fix, because it does not show up in the Pixel 3.

In low light, I tried a few selfies with the flash on, and saw similar results with the Pixel 3 on top, the 3a XL in second, OnePlus comes in third with a lot of noise and the iPhone 7 – with the noisiest image – in fourth.

Clicking photos of the sunset, the OnePlus 6T shot the most impressive and well-exposed photo. The Google Pixel 3 and Pixel 3a XL again looked quite contrasted but also showcased more details in the shadows (like the rocks in the waves). The iPhone 7 was the most oversaturated shot and also the one with the least resolved details.

The iPhone 7 captured some super saturated images. The OnePlus got it perfectly right with lower detail.(Click to expand) L to R: Pixel 3a XL, OP6T, Pixel 3, iPhone 7

I preferred the OnePlus 6T’s landscape photos for its more natural colour reproduction. 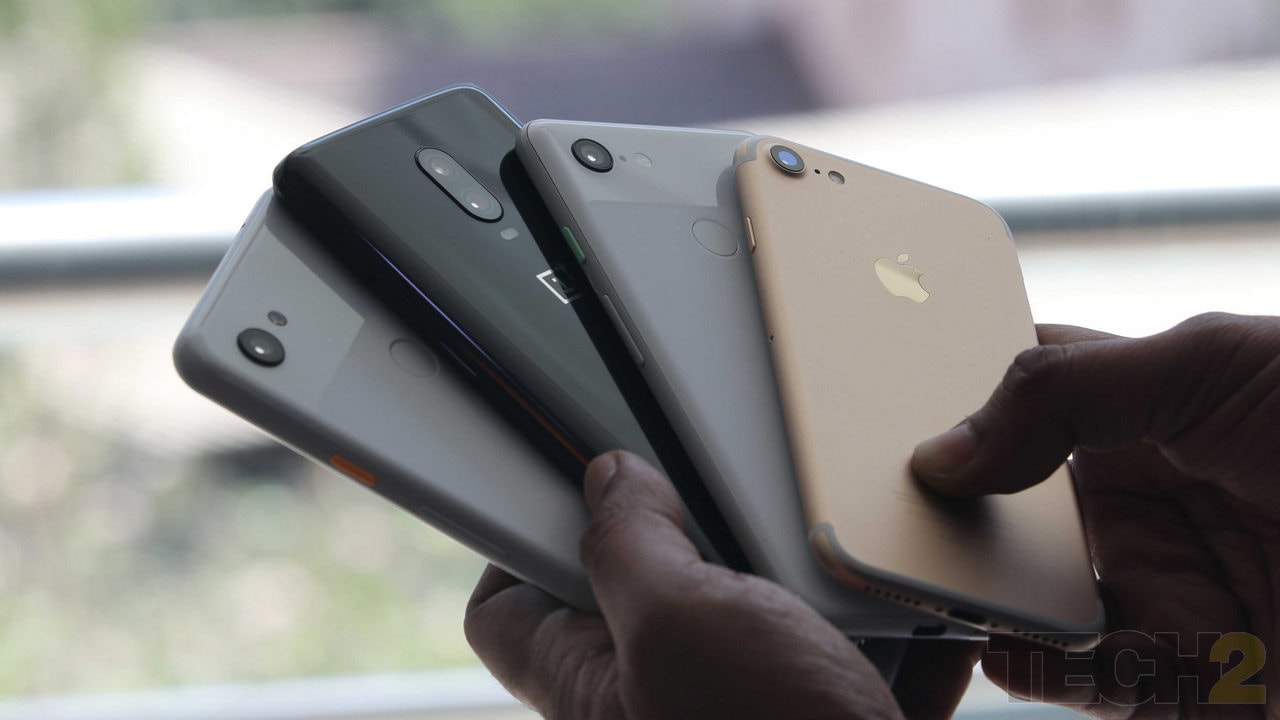 The OnePlus 6T packed in the most power, but its camera software falls horribly short of the Pixels. Image: Tech2/ Omkar G

Low light is where the OnePlus suffered the most and an area where Apple’s iPhone 7 was pretty much unusable.

The OnePlus showed up was just not able to pull off details in low light, and it also went crazy with saturation levels, giving the Gateway of India monument a completely different shade of red. Pixel peeping in these shots is pointless.

The Google Pixel sibling did leagues better here. The Pixel 3a XL also showcased slightly saturated colours but featured a lot more resolved details that OnePlus simply could not capture. I got the best results from the Pixel 3 that showcased the most accurate colours.

Switching to Night mode, the result from the OnePlus 6T looked like the monument was dusted with holi colour instead of being lit up in a shade of orange.

The Pixels delivered way better colour accuracy and details when it came to the night mode. (Click to expand) L to R: Pixel 3a XL, OP6T, Pixel 3, iPhone 7

The Pixel 3 and 3a XL came out on top and the colours too were closer to the actual orange which is pretty darn good for a scene with so many types of artificial light sources around the monument.

The Pixel delivers the most details with Night Sight. (Click to expand) L to R: Pixel 3a XL, OP6T, Pixel 3, iPhone 7

In another street shooting scenario, under bright enough street lighting, the OnePlus did showcase better colours, but fell short on details. The Pixel 3 showcased a different colour tone, but was high on detail. Either way, the Night Mode on the OnePlus 6T never really comes close to the image quality the Pixel is capable of.

I went with a common 1080p @30 fps sample, since it works well with most lighting conditions. Moreover, the OnePlus is the only smartphone capable of 4K 60 fps, while the Pixel and the iPhone capped out at 30 fps.

The Pixel 3a XL delivered the best video quality here with a smooth framerate with balanced exposure despite the changing shooting scene. The 3a XL strangely even managed to outdo the Pixel 3 thanks to the latter's slightly jittery focusing issues.

The iPhone 7 showcased a steady framerate but was not able to deliver the details. The OnePlus 6T, despite its clarity, was a jittery mess. Moreover, the audio was thanks to the blowing wind and was not too great and sounded a bit too harsh compared to the Pixels and the iPhone. The details too were on the low side.

Next, I tried selfie videos and with the wind blowing against me, it was easy to conclude that Pixels had the best stabilisation. The quality too was better on the Pixels, even though the OnePlus 6T delivered some sharp results.

In low light shooting scenarios, the OnePlus 6T came out on top, followed by the Pixel 3 and then the 3a, which was barely usable with a lot more noise than the former. OnePlus 6T showcased less noise than the 3a but colours were oversaturated and the bitrate jittery. The Apple iPhone’s video sample was pretty much unusable.

It becomes evident that the Pixel siblings with their advanced imaging algorithms are clearly superior when it comes to clicking brilliant photos with minimal hardware, whether it’s the number of cameras or the performance of the chipset.

The OnePlus 6T with its brute performance, (we had a 12 GB RAM variant) and its dual rear camera setup in most instances, was just not up to the mark. My guess is that the camera software is the culprit. Google's optimisations are at another level altogether. 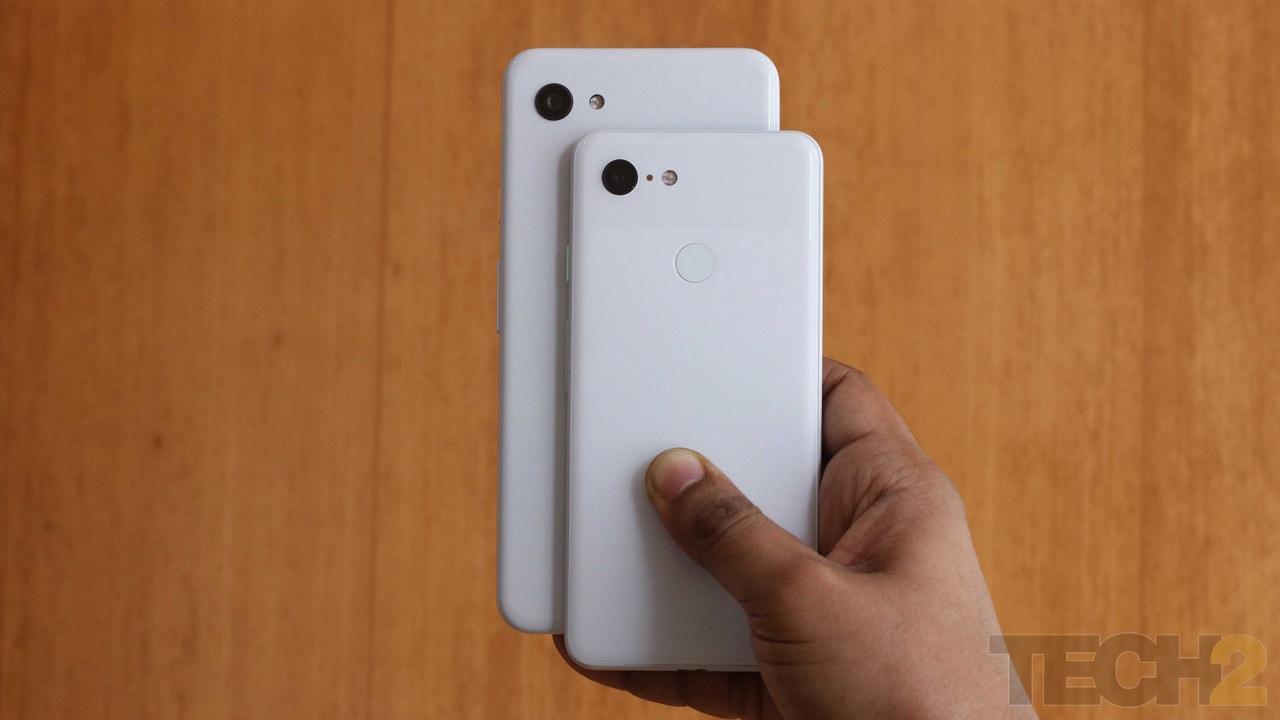 With the launch of the OnePlus 7 drawing nearer, it will be interesting to see how the Pixel’s single camera compares to the expected triple rear camera on the upcoming OnePlus 7 Pro.

But for now, the Pixel 3a XL is the one to go for in the mid-premium (sub Rs 45,000) smartphone segment, if it is purely the camera you are interested in.