The list of the world's most used smartphone apps is out, and Google Maps has beaten Facebook to the top of the race.

According to list byGlobalWebIndex's, 54 percent of the world's smartphone population is actively using Google Maps every month.

The report states that Google Maps is the go-to solution for lost and confused consumers and that rival Apple Maps is nowhere to be seen on the list.(That's no surprises)

Texting app Weixin / WeChat is at number five and according to the report, it is being used by 27 percent users of smartphones. WeChat was only recently launched in India.Twitter's Mobile App is at number six with with 22 percent active usage, followed by Skype and Facebook Messenger. Google Maps is the most used app globally. Reuters

Surprisingly Facebook Messenger is just ahead of WhatsApp, which is at number nine with 17 percent of the global smartphone population using it actively. The report notes that despite the massive publicity that WhatsApp getsboth Weixin/ WeChat and Facebook Messenger are more widely used globally.

At number 10 is Facebook-owned Instagram, which has been actively used by 11 percent of smartphone users in the world. The report notes that growth for the app has been rather stagnant since Q1 of 2013.

RivalVine, launched by Twitter, is far below the list at number 17 with only 2 percent respondents using it actively presently. 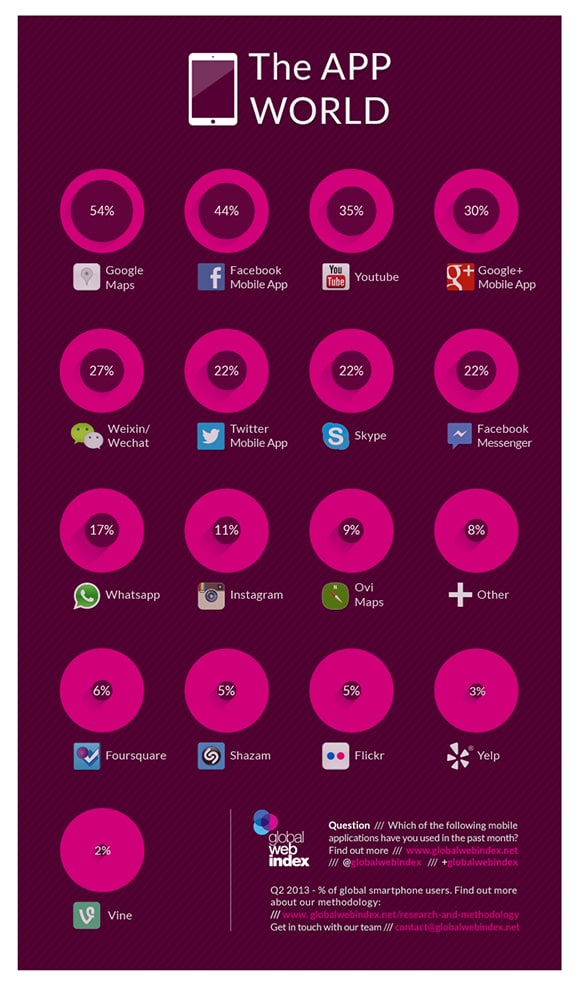