Named #SummerWithGoogle, it will assign an activity to kids and then release one assignment every week for four weeks, Google said in a blogpost.

Google India on 28 May announced a fun, yet educational summer campaign that will help children across the country spend more time learning and making new discoveries, as well as teaching them how to become responsible explorers of the web. 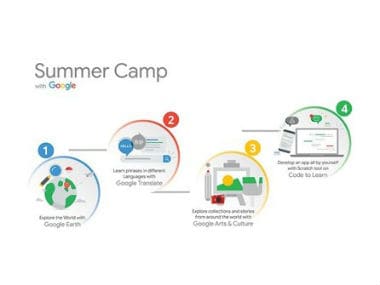 Google India has begun a #SummerWithGoogle campaign for children.

As part of the campaign, named #SummerWithGoogle, Google assigned an activity to the kids. They will release one assignment every week for four weeks, the tech giant said in a blogpost.

The assignment ranges from exploring the country that is home to all the Pandas in the world on Google Earth to saying Gracias and Por Favor as they learn phrases in Spanish and other languages on Google Translate, to taking dramatic virtual tours of museums to make their own gallery on Google Arts & Culture; and ultimately building their very own app to share their summer experience.

Each assignment will also carry questions on the four fundamental codes of being Internet Awesome and teach the young internet explorers a lesson or two on how to be— Internet Smart, Internet Alert, Internet Strong, Internet Kind and Internet Brave, the blogpost said.

Google has also partnered with Kidzania to set-up a 'Summer with Google' experience zone where kids will be encouraged to take a virtual tour and learn about the essentials of being safe on the internet.

"As a parent myself, it has always been a challenge for me to engage my kids meaningfully, summer after summer. And the struggle is real for many more parents," said Sunita Mohanty, Director, Trust and Safety, Google India.

"Therefore, we partnered with our product leaders to bring parents, a series of activities they can do along with their kids to make this a memorable summer," she added.

On completing the tasks, up to 100 kids and their parents or guardians, from across the country will get the opportunity to attend the summer camp with Google at Google Gurgaon or Hyderabad office, where they will get the first-hand experience of Google technology, indulge in fun activities and participate in quizzes.

"The entire campaign will combine the real-world projects with virtual learning experiences and will equip kids with the right digital skills so when they return to school post this summer, they are Internet Awesome," Mohanty noted.

The assignments can be accessed on #SummerWithGoogle website and Google's social media, the statement said.