The Doodle is a photograph of a papercut silhouette diorama made by Indian papercut artists Hari and Deepti.

Google has celebrated the achievements of the 19th century Indian explorer Nain Singh Rawat, the first man to survey Tibet, with a Doodle to mark what would have been his 187th birthday.  He was born in the Pithoragarh district of Uttarakhand in 1830. Disguised as a Tibetan monk, Rawat walked from his home region of Kumaon to places as far as Kathmandu, Lhasa, and Tawang.  In the 19th century, the British were hungry for cartographic details of Tibet. But Europeans were not welcome everywhere at that time. 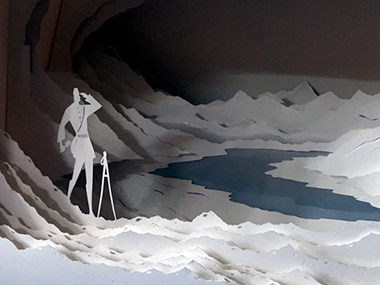 About a century and half ago, a young Nain Singh Rawat who hailed from the Kumaon region of what is now in Uttarakhand, set out for a journey that no one had dared before — to survey Tibet.

Rawat was prominent among a select group of highly educated and brave local men trained in geographical exploration. He determined the exact location and altitude of Lhasa, mapped the Tsangpo, and described in mesmerising detail fabled sites such as the gold mines of Thok Jalung.

The terrain was tough, resources rudimentary, and yet Rawat, who often travelled in the guise of a Tibetan monk, managed to determine the exact location and altitude of Lhasa, map the Tsangpo river, and describe in mesmerising detail fabled sites such as the gold mines of Thok Jalung.

"He maintained a precisely measured pace, covering one mile in 2000 steps, and measured those steps using a rosary. He hid a compass in his prayer wheel and mercury in cowrie shells and even disguised travel records as prayers," Google said.

A thirst for knowledge, which was also key to fulfilling political goals, and the need for secrecy led to them to create a select group of highly educated and brave local men trained in geographical exploration. They were known as Pundits. Rawat was prominent among them. But his journey served more purposes than achieving immediate political goals of the British. His mapping of the eastern course of the Tsangpo helped establish the fact that this big river in Tibet and Assam's Brahmaputra were actually the same.

In 1865-66, Rawat travelled almost 2,000 kilometres from Kathmandu to Lhasa and then to Lake Manasarovar and back to India. His last and greatest journey was from Leh in Ladhak via Lhasa to Tawang in 1873-75. Rawat's contributions did not go completely unrecognised. The Royal Geographical Society awarded him the Patron's Medal in 1877. The Indian government brought out a postage stamp featuring Rawat in 2004.

Google's Doodle on Saturday portrays Rawat as he might have looked on his travels — solitary and courageous, looking back over the distances he had walked, rosary beads in hand, and staff by his side. Rawat died of cholera in 1882.

Today's Doodle is not a typical artwork as most Doodles are. Instead, it is a photograph of a papercut silhouette diorama made by Indian papercut artists Hari and Deepti. Readers can check out more of their artwork on their Instagram profile. The Doodle appears only in India.