Sonny Ross, an illustrator who drew today's Google Doodle tries to capture the frenzy of purple clothing in Britain after mauveine was commercialised. 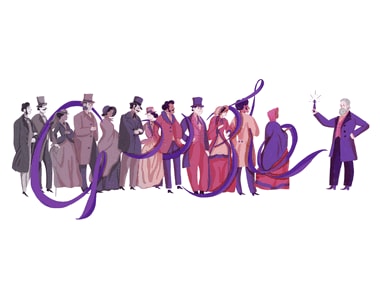 Born on 12 March 1838, William Henry Perkin's discovery of 'mauveine', the first synthetic dye, was found at the time when the textile industry was at a high. According to Google's blog post, an 18-year-old laboratory assistant, Perkins was cleaning out a beaker following a failed experiment when he noticed that the constituents of the beaker left a vivid purple stain when diluted with alcohol.

Following his invention, Perkins quickly focused on the patenting, manufacturing and commercialisation of this purple dye. Now, at the time of the invention, purple clothing was in style in Britain, but was expensive and faded in time.

Sonny Ross, a UK-based illustrator who drew today's Doodle tries to capture the frenzy of the once-exclusive purple clothing in Britain after mauveine was commercialised.

Queen Victoria herself wore a mauveine-dyed gown to the Royal Exhibition of 1862, making Perkin's invention a huge hit. Having gained wealth and success from his stint in manufacturing, Perkin eventually returned to laboratory research and was later knighted in 1906, on the 50th anniversary of his discovery.

The reach of today's Doodle is limited to the United States, west coast of South America, the UK and a few other European countries, India, Japan and Indonesia.