The Google Doodle features potato slices which Koch used for his experiment until the Petri dish was invented by his assistant at the time, Julius Petri.

As medicine evolves leaps and bounds with technological advancements and varied fields of research, Google has decided to roll back the years and celebrate German scientist and doctor, Robert Koch. On this day in 1905, the microbiologist was awarded the Nobel Prize in Physiology or Medicine. 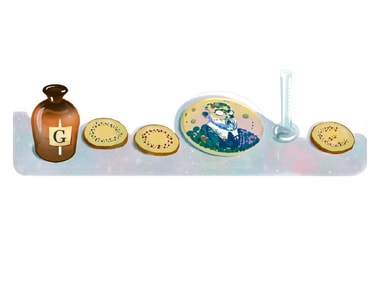 Commonly regarded as the founder of modern bacteriology, it was Koch's research and effort on tuberculosis along with other life-threatening diseases like cholera and even anthrax that earned him the award. The scientist dedicated his life to studying germs and was the first to form the idea that germs were the cause of diseases. As per Google, an idea which turned key to him identifying the bacterium for anthrax, tuberculosis and cholera. He was also involved in a failed attempt at developing a drug to treat tuberculosis.

Born in the German town of Hannover on 11 December 1843, Koch taught himself to read and write even before he went to school. He graduated from the University of Gottingen in 1866 and then served in the Franco-Prussian War, which began in 1870. Koch worked for the Imperial Department of Health where he began his study on a particular infectious disease which affected the lungs and other organs, which later proved to be vital in his contribution to microbiology.

It was Koch who dismissed common belief at the time that tuberculosis was an inherited disease by proving that the disease was infectious. Developing a number of the basic principles and techniques of what is referred to as modern bacteriology, Koch work inspired a generation of scientists known as "microbe-hunters". This gave birth to a Golden Age in the field, inspiring scientists to go on and discover the cause of as many as 21 different diseases. A movement which the German explained stating, “As soon as the right method was found, discoveries came as easily as ripe apples from a tree."

The Google Doodle also features potato slices which Koch used for his experiment until the Petri dish was invented by his assistant at the time, Julius Petri. The Petri dish seen in the Google is what bears Koch's image in the doodle.