Google AI models which helped NASA discover exoplanets, are now available for everyone

A Google model based on Artificial Intelligence (AI) and Machine Learning (ML) that helped NASA discover two exoplanets, is now available for researchers to process data from Kepler Space Telescope. 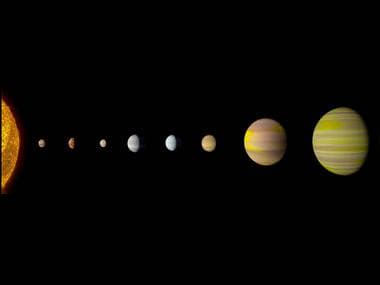 With the discovery of an eighth planet, the Kepler-90 system is the first to tie with our solar system in number of planets. NASA

The TensorFlow model decoded massive sets of data from NASA's Kepler Space Telescope to discover two exoplanets last year, including one that has the first known eight-planet system like ours.

One of the two newly-discovered planets is Kepler-90i — a sizzling hot, rocky planet that orbits its star once every 14.4 days. This marked the discovery of an eighth planet circling Kepler-90, a Sun-like star 2,545 light-years from Earth — making it the first known eight-planet system outside of our own.

To search for planets in Kepler data, scientists used automated software to detect signals that might be caused by planets and then manually followed up to decide whether each signal is a planet or a false positive.

"We've only searched 670 stars out of 200,000 observed by Kepler .Who knows what we might find when we turn our technique to the entire dataset. We hope this release will prove a useful starting point for developing similar models," Google said.

Kepler-90i is 30 percent larger than Earth and has a surface temperature of approximately 800 degree F (426.6 degrees Celsius). It also orbits its star every 14 days.

The discovery came after Shallue and Andrew Vanderburg at Google AI trained a computer to learn how to identify exoplanets in the light readings recorded by Kepler — the minuscule change in brightness captured when a planet passed in front of, or transited, a star.

Inspired by the way neurons connect in the human brain, this artificial "neural network" sifted through Kepler data and found weak transit signals from a previously-missed eighth planet orbiting Kepler-90, in the constellation Draco.

While machine learning has previously been used in searches of the Kepler database, the new research demonstrated that neural networks are a promising tool for finding some of the weakest signals of distant worlds.