Google: 30.3 million app downloads on the Play Store in 2018 were potentially harmful

0.04 percent of downloads from Google Play were classified as potentially harmful applications by Google.

Google's Android is by far one of the most popular mobile operating systems in the world today but security issues have always been a cause of concern for the company.

The company has been trying to tackle these issues over time, making changes to the way permissions are approved for Android apps, however, an estimate by SensorTower states that as many as 30.3 million apps on the Play Store have been categorised as potentially harmful apps. Considering there are 75.7 billion apps on the Play Store, that alarming number accounts for merely, 0.04 percent of the total apps. But Google is certainly not taking chances.

In its annual Android Security and Privacy report for 2018, Google said that new policies, such as more privacy-hardened APIs and wider implementation of Google Play Protect — its built-in malware scanner — has contributed to the company dealing with security issues.

Google also pointed out in the report that the company has been trying extremely hard to protect devices and users when they download and use apps from outside the Google Play store. The company claimed that they had prevented a whopping 1.6 billion potentially harmful app installation attempts from outside of Google Play Store.

This number may not be significant when we look at downloads within the Play Store, but for those pushing potential malware through apps which are sideloaded onto phones. Google in its annual report noted that in 2018, some 0.08 percent of devices that used Google Play exclusively for app downloads were affected by potentially harmful apps. This figure is actually the same as the year before, and even higher than the year before that.

This means that while Google's crackdown on potentially harmful apps which are sideloaded, has been strong in 2018 (down 15 percent), the same isn't quite true for apps within the Play Store. 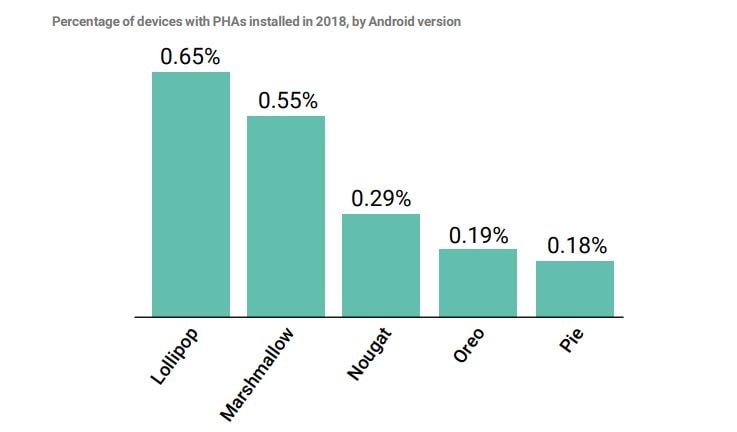 But then how good is having Google Play Protect right? Well, Google's data show that your chances of installing malicious apps are considerably improved if you have Google Play Protect working. The report states that only 0.45 percent of Android devices using it, installed potentially harmful apps, down from 0.56 percent in 2017.

It seems also that this trend is also due to general improvements over time across the Android ecosystem. Later versions of the OS showed better rates of PHA installs. Though the reduction between Android Oreo and Android Pie was only a 0.01 percentage point. This goes to show that Google's job is getting more challenging as new versions come to the fore.

Hopefully, Android Q is the solution to most of Google's Android Security problems?