The Q4 2018 has become the fifth consecutive quarter that recorded a decline in shipments.

In a recently published report by International Data Corporation (IDC), the research firm found that in fourth quarter of 2018, a total of 375.4 million smartphones were shipped. That number is down by 4.9 percent since Q4 2017, when the smartphone shipments were recorded at its peak.

The Q4 2018 has become the fifth consecutive quarter that recorded a decline in the global shipments. The report says that 2018 turned out to be the worst year ever for smartphone shipments. In the entire year, only a total of 1.4 billion smartphones were shipped.

Interestingly though, the Indian market saw extraordinary growth in 2018, with research firm Counterpoint reporting that India's overall smartphone shipment figure grew by 10 percent last year with 145.2 million smartphone units being shipped as compared to the 132 million units shipped in 2017.

As for smartphones, Samsung maintained its lead this quarter with 70.4 million total shipments, according to IDC. For the South Korean company, this is a 5.5 percent decline from the 74.5 million units it shipped globally in Q4 2017. 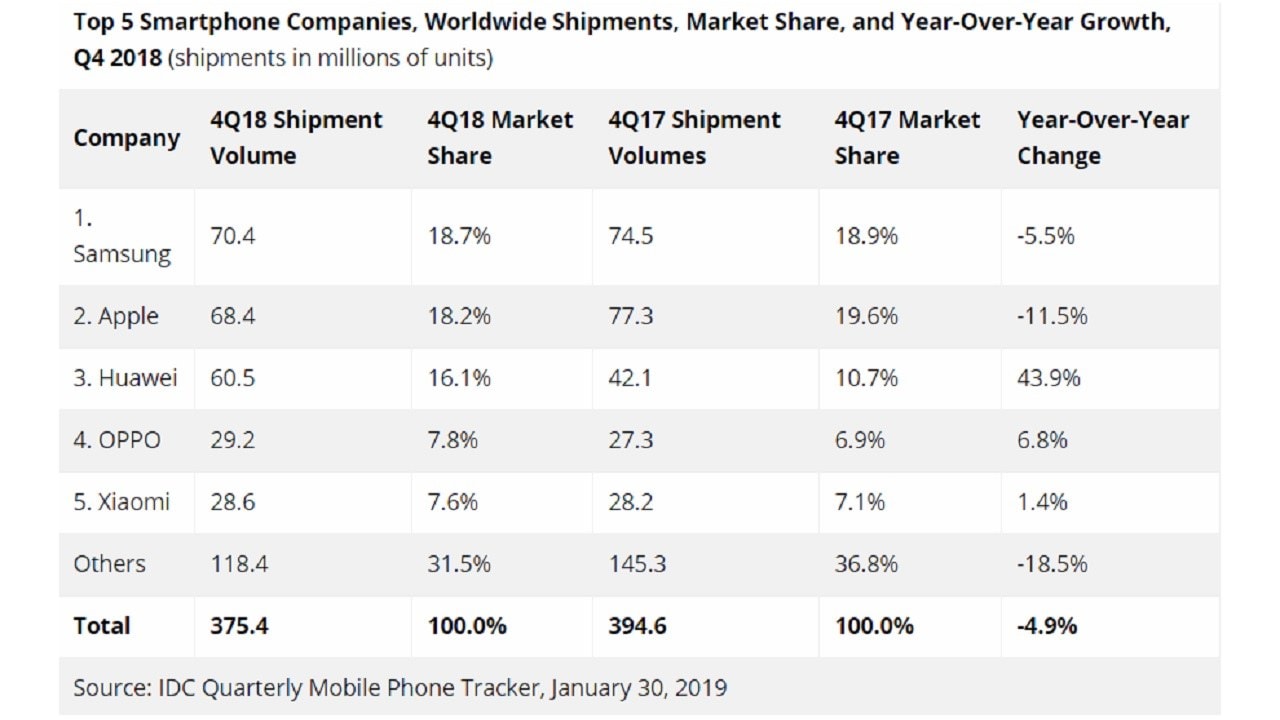 Meanwhile, Apple, which ranks second in the world by volume, saw the volume of iPhone shipments fall by 11.5 percent, with total volume declining by 3.2 percent to 208.8 million units from 215.8 million for the full year. The expensive iPhone pricing is definitely a reason for that.

However, despite the bad market, the Chinese smartphone makers saw their shipment graphs travelling upwards. Reportedly, Huawei, Oppo, Vivo and Xiaomi grew their share of the market to 78 percent this year, as compared to their 66 percent share in 2017. Huawei, in fact, logged the highest growth in terms of shipment in 2018, going from 154.2 mn units to 206 mn units. Xiaomi, in the fourth place saw global shipment volumes go from 92.7 mn units to 122.6 mn units — a 32.2 percent growth. 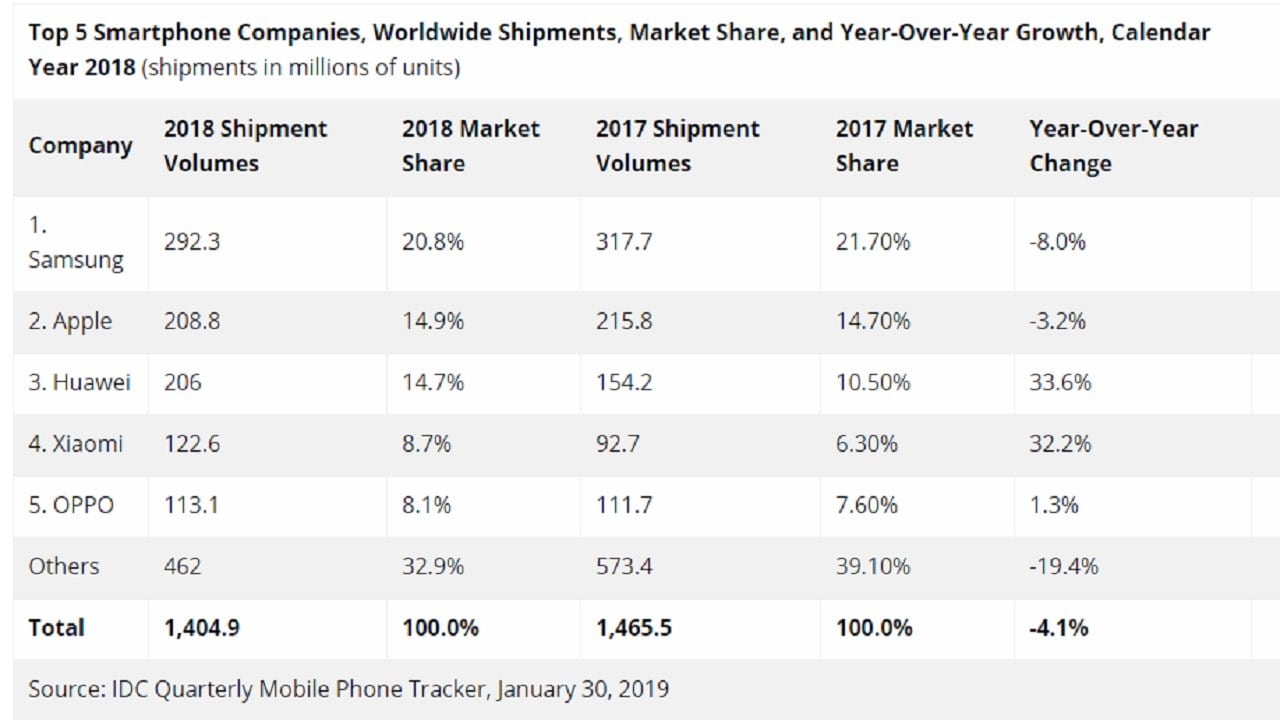 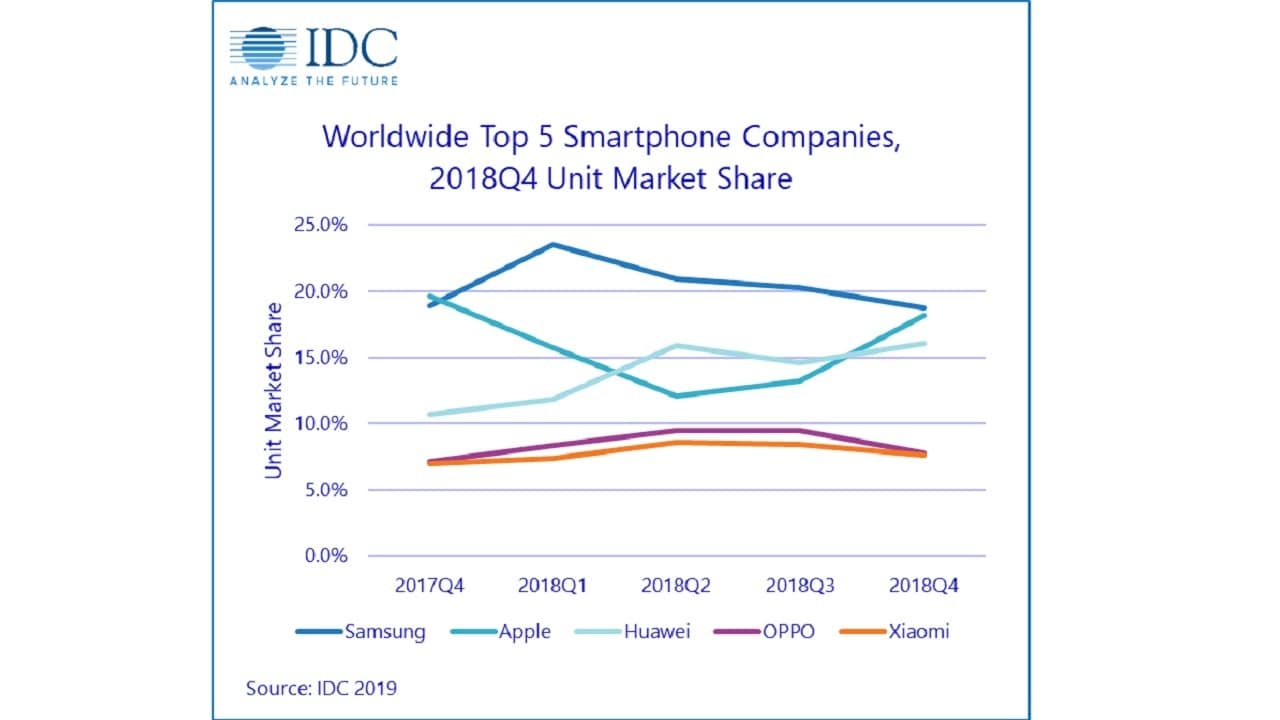 On a worldwide basis though, the top five smartphone companies — Samsung, Apple, Huawei, Oppo, and Xiaomi — continue to get stronger and now account for 69 percent of smartphone volume, up from 63 percent in 2017.