For India, space is a frontier for exploration, not an arena for international competition: Foreign Secretary S Jaishankar

The foreign secretary also emphasised that the outer space should be "safeguarded as a heritage of mankind" and preserved for the future generations. 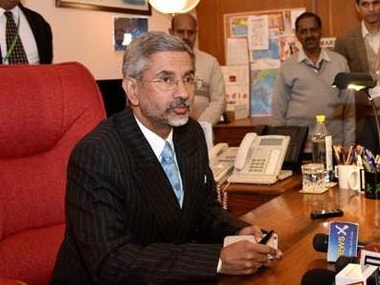 The foreign secretary also emphasised that the outer space should be "safeguarded as a heritage of mankind" and preserved for the future generations. He further outlined that India is a party to all the legally-bounding instruments on the outer space and a member of The Conference on Disarmament, since its inception. Jaishankar, also a member of the Space Commission, said India is an emerging economy but "very proud" of its space achievements.

"India has witnessed rapid strides made by our space programmes in the form of the SLVs, the SPLVs, the GSLVs, the GSLVS Mark III, and the satellite launching capacity today are aimed at 18-20 per year," he said. Indias space programme has become truly a peoples programme with a "strong umbilical link" to the societal development, the foreign secretary said. "Speaking of the national need to promote space technology-based tools and applications in the government and development... Prime Minister (Narendra) Modi emphasises that there should be no space between the common man and the space," he said.

This approach continues to be the "guiding factor" in India's space programme, Jaishankar said. The senior Ministry of External Affairs official said there are two aspects to the space programme — the capability development with phenomenal leapfrogging potential and second, the image of India in the international community that it throws up. The seminar, which began yesterday and was jointly conducted by the Indian Space Research Organisation and the Federation of Indian Chambers of Commerce and Industry, saw a number of private entities from the space domain, participating from India, besides a few companies from foreign countries.

"International collaboration is today hardwired into India's space programme. At present, we have more than 200 international cooperation agreements with more than 40 countries and international organisations," he said. Chandrayaan is an example of a successful collaboration, he said, adding, India has also demonstrated a cost-effective model by sending the Mangalayaan probe into space for USD 74 million.

"This conference has helped to identify issues which will act as enablers to further strengthen our international cooperation," he said. ISRO chairman A S Kiran Kumar said, "If we do not reach out to partners, we will be left out. These interactions at the seminar were extremely encouraging." A memorandum of understanding between the FICCI and the Singapore Space and Technology Association (SSTA) was also signed on the occasion, that would allow the two autonomous bodies to collaborate for two years.