First look: Even Orkut is cooler than Rahul Gandhi's Khidkee.com

With social media turning out to be the new holy grail for politicians and Twitter trolling coming only second in the line of priorities after rally addresses, the BJP and the Congress have upped their ante in the virtual space.

The Congress, however, has a problem. It's biggest adversary Narendra Modi has literally entrenched himself on Twitter fanning extreme emotions in his followers, and some of his detractors. And just like how the party is struggling to pitch someone against the Gujarat CM in real life, they're literally out of options in the social media.

Rahul Gandhi, given his wobbly social media and PR back-up, has deliberately stayed away from platforms like Twitter, Facebook or blogging. While reformed Tweeters like Shashi Tharoor bring a semblance of sanity to the virtual space, a Manish Tewari or Digvijaya Singh adds precious little to the party's virtual image. Twitter regulars would know that Modi and the BJP have more numbers of official online ranters and defenders on their side than the Congress' handful. 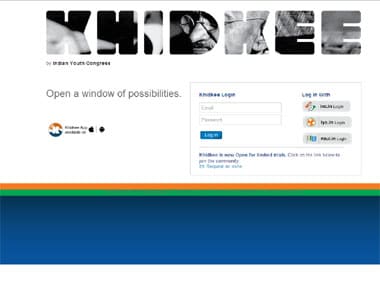 A screenshot of the site.

Rahul Gandhi's Khidkee, therefore, can be seen as an attempt to counter the Opposition's online surge, that too away from Twitter or Facebook.

Manish Tewari, while bringing the curtains down on the Congress conclave, told his party men: "You should not get unnerved by the strong language of the Opposition. You should remain polite but not soft."

We are guessing he flaunted his recent exchange with Sushma Swaraj as an example. While not much is known about Khidkee and how it would help bolster Congress' online dialogue with its target voters, we decided to walk through the site and figure out how it intends to work.

Considering the site was launched just yesterday, it's not right to jump to conclusions about how effective it is as yet. However, from the looks of it, Khidkee seems more like a social networking platform for Congress supporters and workers.

A bit of a sandwich of Facebook and Twitter, the site allows you to 'follow' other users, be followed and invite friends to join. It has a 'Members' tab which gives you a list of all the members who have enrolled with the site and the email addresses that they used to sign in.

The 'Profile page' of the user lets you upload a picture, put down your contact address, location etc. There are three other tabs on the page, namely 'Posts', 'Groups', and 'Members'. Clicking on the 'Posts' tab leads you to a Facebook homepage-like feed which provides updates other members have put up. You can post your own picture, tag other users and post and update too. However, the posts feed can be customised by an user.

The Groups page reveals a bunch of groups that you can be apart of, much like it works on Facebook - only instead of 'Red Velvet cake lovers', you'll get groups called 'Rahul's sycophants'!

In fact, you can choose from Digvijaya Singh's fans (true story, they exist), or Sonia's followers etc. Actually, the Groups page could be a veritable feast for Opposition trolls. Say for example, the group called Digvijay Singhji. The group description reads: "Digvijay Singhji is the tallest leader in congress party (of course after Soniaji an Rahulji). Digvijay Singhji is one of those few fearless leader left in Indian politics who does not fear to call spade a spoon when the spoon and spade seem to be the... (sic)"

Evidently, all the 297 members of the group see nothing grammatically or intellectually disturbing about the unfinished spade-spoon analogy. How that is supposed to grease Congress' connect with target voters is an answer that needs great imagination, unless of course the party's alternative to BJP's crazy-Hindus votebank is the brotherhood of English grammar murderers. Actually, this might be true. The other popular group is dedicated to AK Anthony, allegedly, the "roll model" leader.

Evidently, there seems to be no official moderator from the Congress managing the site. Or if there are any, they aren't paying much attention to the contents of the group. Otherwise, 'Rahul's sycophants' would have been immediately banned by the party for placing unrealistic expectations on the Congress scion. The description reads: We are unabashed sycophants of Shri Rahul Gandhiji who is god sent to become the next prime minister of India. 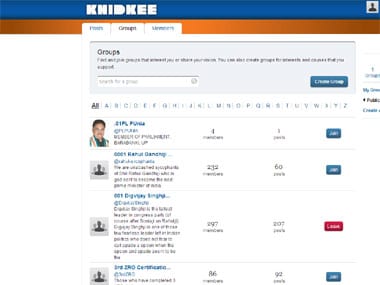 A screenshot of the 'groups' page.

Also, an interesting anecdote. At the time the report was being filed, Rahul's sycophants had 232 members while Digvijay Singhji had 297.

Of the several other groups happen to be one dedicated to the AIIMS, one of NGOs working for the grassroots while most others have been started of Youth Congress factions in various states.

At present, however, Khidkee doesn't disseminate any valuable information about either the party's political position on various issues or about the government's policies.

If you are expecting debates or discussions on much-debated policies like the Food Security Bill, the FDI etc, there isn't much of a discussion taking place on those lines. And from the plethora of groups that have mushroomed on it, Khidkee seems more like a Congress workers' mutual admiration circle.

One would have expected at least a handful of posts from its leaders, especially Congress poster-boy Rahul Gandhi as an introductory stance, but the platform has been left to users who are fast over-running it with inane demonstrations of their love for their party. Chances are, in such a virtual climate, no sensible dialogue will be sustained and the site will be taken over by troll cat-fights.

What does a person, curious about the Congress political stance on national issues, gain from enrolling into the site? Nothing much, except for a lowdown on the innumerable Youth Congress groups across the country and believe-it-or-not proof of Digvijay Singh's hitherto unheard of charm.