Falcon Heavy was designed to carry humans into space and restores the possibility of flying missions with crew to the Moon or Mars, according to SpaceX. 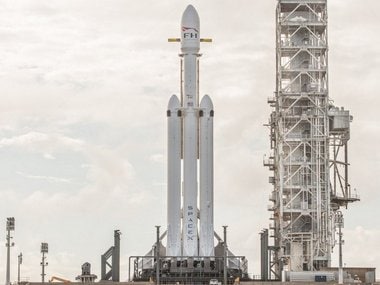 Soon after the test, Musk tweeted that the rocket is ready for launch "in a week or so."

Falcon Heavy hold-down firing this morning was good. Generated quite a thunderhead of steam. Launching in a week or so. pic.twitter.com/npaqatbNir

The tech billionaire has said the rocket will carry a red Tesla Roadster into space, eventually to a Mars orbit, where it should remain "for a billion years or so if it doesn't blow up on ascent."

The Falcon Heavy, a reusable super heavy-lift launch vehicle, is seen as the world's most powerful rocket since NASA's Saturn V moon rocket in the 1960s.

Its first stage is composed of three Falcon 9 nine-engine cores whose 27 Merlin engines together generate more than 5 million pounds (2.3 million kg) of thrust at liftoff, equal to about eighteen 747 aircraft.

Falcon Heavy was designed to carry humans into space and restores the possibility of flying missions with crew to the Moon or Mars, according to SpaceX.