Firefox 69 blocks third-party tracking cookies, cryptomining by default for everyone

Firefox 69 is available for Windows and macOS from its official website. Android version is rolling out slowly on Google Play.

Mozilla has amped up the privacy measures on its browser Firefox in its latest update.

Firefox 69 has been launched for Windows, Linux, Mac and Android. It now comes with measures to block third-party tracking cookies as well as cryptomining by default. This feature was present for a small number of users from June, but from today this feature will be on for everyone using Firefox. Blocking third-party tracking cookies will keep companies keeping a track of your online activity at bay and prevent them from potentially selling your data to others.

Firefox 69 is available for Windows and macOS from its official website. Existing Firefox users will be able to upgrade to version 69 automatically.

Android version of Firefox 69 is slowly rolling out on Google Play.

What is Enhanced Tracking Protection?

With Firefox 69, Mozilla has turned on the Enhanced Tracking Protection feature for all users. The Enhanced Tracking Protection feature was first turned on in June this year, but it was only for new users. This makes Firefox block third-party tracking cookies from over 2,500 tracking domains. With version 69, this feature is available for everyone.

To access it, you need to go to Settings > Privacy & Security or hit the shield icon on the address bar. Under Content Blocking > Cookies, you can select the third-party option. The new feature lets you block third party trackers from the ad tech firms and allows first-party cookies which don't break your user experience. 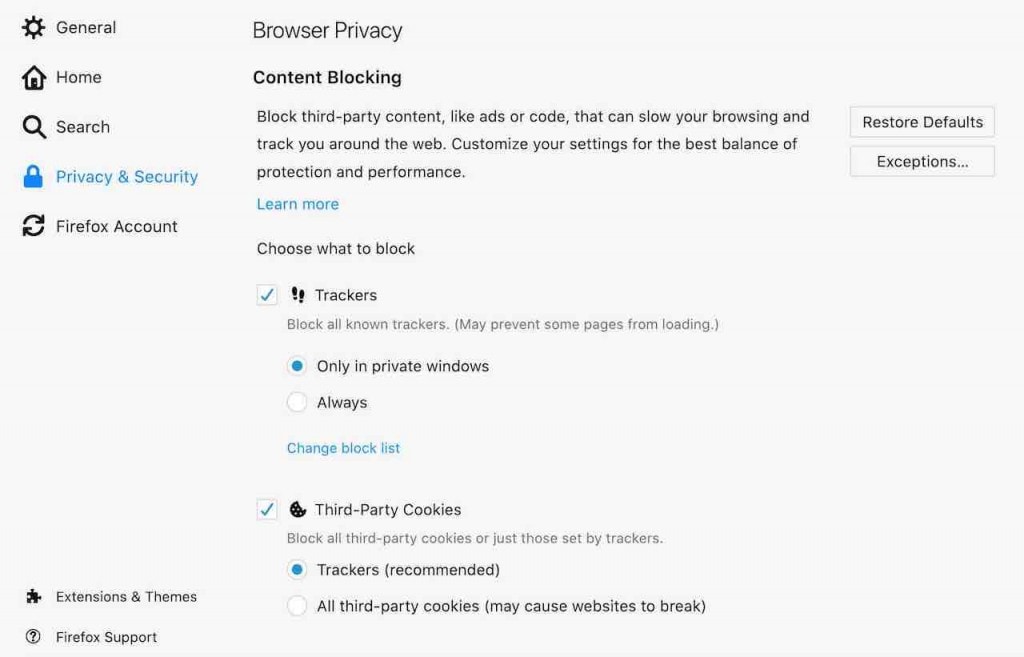 With Firefox 69, Mozilla also plans to block cryptomining. This is a sort of attack where crytocurrency miners use your CPU to generate cryptocurrency. This is activated by certain scripts on compromised websites and it all happens in the background. While this doesn't necessarily steal data from your systems, it makes your work crawl as all your CPU resources are being used for mining cryptocurrency by the hacker.

Fingerprinting is another method by which trackers build your digital fingerprint as you browse the web.

To enable cryptomining, you can click on the 'i' icon in the address bar and clicking on the gear icon on the right side under Content Blocking. Else head to Preferences > Privacy & Security > Content Blocking. From here select Custom and check 'Cryptominers' and/or 'Fingerprinters'. With Firefox 69, Cryptomining is blocked by default as part of the Standard setting. Fingerprinting is blocked as part of the Strict setting.

Other improvements in Firefox 69

Here are the other improvements in the new version of Firefox: