Zuckerberg said that Facebook had introduced transformative avenues for speech that should not be shut down.

Facebook Inc Chief Executive Mark Zuckerberg on Thursday defended the social media company's light regulation of speech and lack of fact-checking on political advertising, while citing China's censorship as a roadblock to operating in the country.

Facebook has been under fire in recent years for its lax approach to fake news reports, state-backed disinformation campaigns and violent content spread on its services, prompting calls for new regulations around the world.

In a speech at Georgetown University filled with references to the First Amendment and the fight for democracy, Zuckerberg stood his ground, saying social media had introduced transformative avenues for speech that should not be shut down. 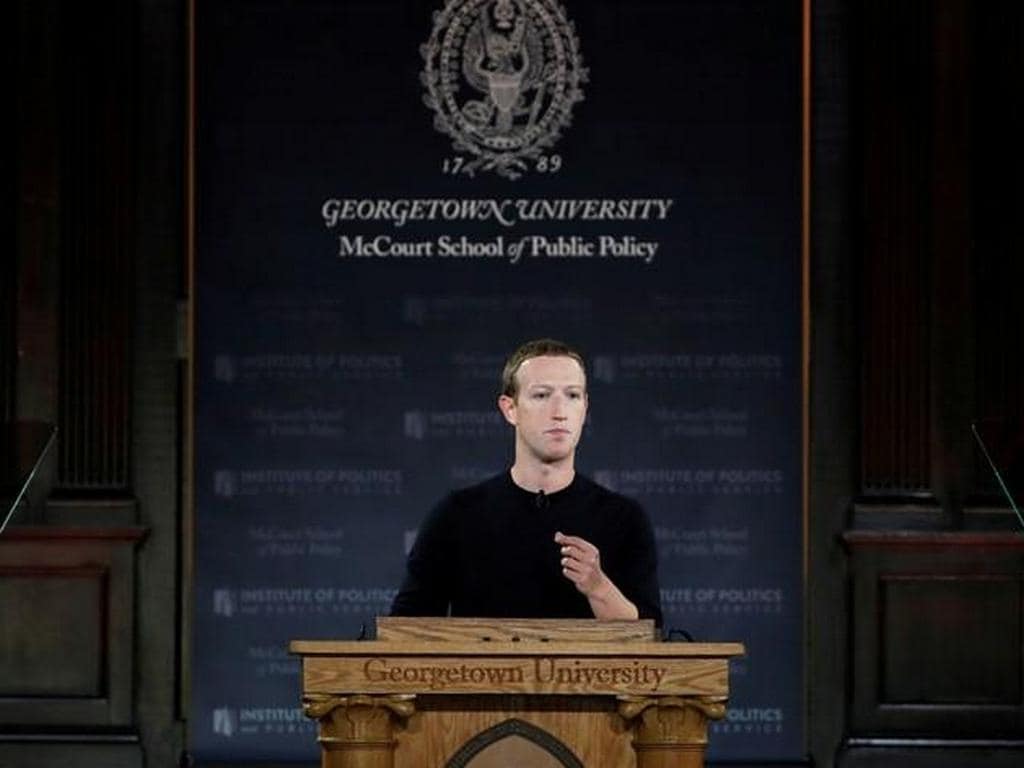 Facebook has been under fire in recent years for its lax approach to fake news reports, state-backed disinformation campaigns and violent content spread on its services. Image: Reuters

"People having the power to express themselves at scale is a new kind of force in the world. It is a Fifth Estate alongside the other power structures of society," he said.

Zuckerberg framed the company's decisions around that concept, including its recent retreat from years of aggressive courtship of China, an obstacle to his vision of connecting the world's population.

He attacked the rapidly growing Chinese-owned app TikTok, saying the short video platform censored political protest, including in the United States, a charge the company denies.

In leaked audio of an address to Facebook employees weeks earlier, Zuckerberg spoke about TikTok as a formidable competitor, calling it the first consumer internet product built by a Chinese tech giant to find global success, but did not mention its approach to speech.

Over the course of Facebook's charm offensive, Zuckerberg met with Chinese President Xi Jinping, learned Mandarin and posted a photo of himself running through Tiananmen Square.

Facebook briefly won a license to open an "innovation hub" in Hangzhou last year, but it was later revoked.

Zuckerberg effectively closed the door to China in March, when he announced his plan to pivot Facebook towards more private forms of communication and pledged not to build data centres in countries with "a track record of violating human rights like privacy or freedom of expression."

He repeated his concern about data centres on Thursday, this time specifically naming China.

"I wanted our services in China because I believe in connecting the whole world and I thought we might help create a more open society," Zuckerberg said. "I worked hard to make this happen. But we could never come to agreement on what it would take for us to operate there, and they never let us in."

He received a question from the audience about what conditions or assurances he would need to enter the Chinese market, but did not address them in his response.

Zuckerberg also defended the company's political advertising policies on similar grounds, saying Facebook had at one time considered banning all political ads but decided against it, erring on the side of greater expression.

That assertion was immediately panned by critics, among them candidates seeking the Democratic presidential nomination who have asserted the company should do more to address disinformation and abuse ahead of the November 2020 election.

"His choice to cloak Facebook's policy in a feigned concern for free expression demonstrates how unprepared his company is for this unique moment in our history and how little it has learned over the past few years," said spokesman Bill Russo.

U.S. Senator Elizabeth Warren, another leading contender for the Democratic nomination, has been especially vocal about her critiques of Facebook, bashing its advertising policy and calling for the company to be broken up on antitrust grounds.

But the focus on free speech is likely to win Zuckerberg some friends on the right, whom he has been courting aggressively in a recent visit to Washington and dinners at his home in California.

Republican lawmakers routinely accuse the company of showing "anti-conservative bias" in its content moderation, without offering evidence. The company denies any favouritism.

Facebook has been under scrutiny after finding Russian propaganda on its platform which many believe affected the outcome of the 2016 US presidential election, won by Donald Trump.

Trump has disputed claims that Russia has attempted to interfere in US elections. Russian President Vladimir Putin has denied it.