A Facebook spokesperson speaking to the site said that Facebook is testing creative tools to bring pictures and videos to life and introducing easier ways to find and share stories.

Facebook is facing a lot of music for its involvement in the Cambridge Analytica data scandal. Even as Facebook CEO and security teams are pushing out new measures to prevent data sharing with third-party apps, the core product development is also running smoothly. Facebook Stories, the format that was unabashedly lifted from Snapchat Stories over a year ago, is all set to get a shot in the arm to make it more mainstream. 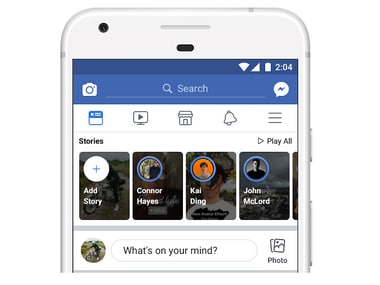 A Facebook spokesperson speaking to the site said that Facebook is testing creative tools to bring pictures and videos to life and introducing easier ways to find and share stories.

The Facebook status composer window for mobile will focus on showing an open camera window which also shows you the most recent images from your camera roll, to nudge you to share them. Facebook has, in all, 17 choices for status updates which include check-in, GIFs, text update, and more. With the new camera window feature, Facebook wants users to make Stories a more prominent option. This does not mean that it will default to opening up the camera window as the home screen, like Snapchat. This feature will be tested with a small subset of users around the world. The second feature under test has to do with sharing. When you shoot something with the Facebook Camera, the sharing page will default to having Stories selected. This is another way to nudge users to share their photos as Stories rather than just adding to albums. Earlier users had the choice to choose if they wanted to post to Stories, News Feed or share it on Messenger. This particular test is starting off with all users in the Dominican Republic.

As if the Stories bubbles aren't large enough, Facebook is planning to show Stories with large preview tiles above the News Feed, behind the smaller profile pictures of the creators. According to TechCrunch, teasing users with what's inside a Story could make a lot of users click on these Stories and watch them. Messenger already has a feature like this.

Facebook is currently testing these three features before it rolls them out for a wider audience.