Facebook Safety Check feature used by 10,000 people to mark themselves safe during dust storms in India

To help its users during disasters, Facebook created a Crisis Response Centre as a hub of information about recent crises.

Facebook on 15 May said nearly 10,000 people have marked themselves safe till now, using the social network's "Safety Check" feature that was activated on 14 May following storms across India. 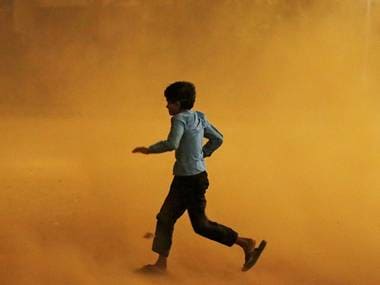 A boy runs for cover during a dust storm in New Delhi, India. Reuters

To help its users during disasters, Facebook created a Crisis Response Centre as a hub of information about recent crises.

The centre's Safety Check tool allows people to notify their family and friends that they are safe.

Following storms across India, Facebook activated the "Safety Check" feature on 14 May.

This feature from the social media giant has been used during natural calamities and terrorists attacks across the world.

A day after Delhi saw a severe dust storm and winds at 107 kmph killing two people here, the national capital on 14 May saw a calm day.

The Met office predicts storm and winds of less severity for 48 hours starting 15 May.