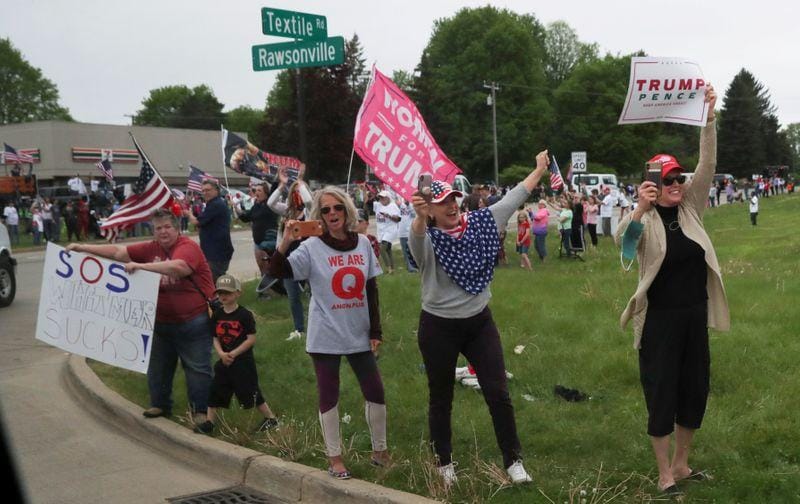 The world's biggest social network, saying it was expanding its policy on perceived risks to public safety, also imposed restrictions on the remaining 1,950 public and private QAnon groups it could find. It will no longer recommend them to users and make them less likely to be discovered in searches.

Hundreds of thousands of Facebook users are known to belong to one or more QAnon groups, but Facebook declined to give more precise figures.

Facebook also removed 980 groups that it said encouraged rioting, a majority seen as generally right-wing militias but a substantial number identified as part of the leftist antifa movement. (https://bit.ly/325oQEN)

The long-anticipated takedowns come amid sustained criticism as QAnon activity has surged on Facebook this year. Twitter previously removed thousands of QAnon accounts.

QAnon began in the aftermath of the false “pizzagate” conspiracy that claimed, ahead of the 2016 presidential election, that prominent Democrats were running a pedophile ring out of the basement of a Washington restaurant.

It centers on anonymous postings from someone using the nickname Q who claims to be a high official in the administration of President Donald Trump. Q and his most-followed supporters idolize Trump and have asserted that Democratic and Hollywood elites worship the devil, eat children, and in some cases have already been executed after secret military tribunals and replaced by actors.

A vocal QAnon supporter last week won the Republican congressional primary in a conservative Georgia district, drawing praise from Trump, who has declined to disavow the movement.

Asked Wednesday about the QAnon belief that he was saving the world from satanic cannibals, Trump said: "Is that supposed to be a bad thing? ... We are saving the world, from a radical left philosophy."

The FBI identifies QAnon as a potential source of domestic violence, and some of its followers have been charged with murder and kidnapping.

Facebook has long considered some organizations to be inherently dangerous and banned them, and some critics had urged the company to do the same with QAnon.

"Taking down groups and pages, restricting others, and banning hashtags is a step, but an insufficient one," said Cindy Otis, a former CIA analyst with a new book on misinformation.

A Facebook spokeswoman acknowledged that QAnon followers would start new groups with new code words, and that the attempt to restrain them would be an ongoing battle.