Facebook News Feed to change again: Users can explain why they hide posts

Now, according to reports on ABC News, Facebook will soon be rolling out a new feature that allows users to explain why they hid a particular post.

Facebook users have previously been able to 'hide' posts, ads, photos and status updates on their News Feed that they don't want to see, or are plain annoyed with. Now, according to reports on ABC News, Facebook will soon be rolling out a new feature that allows users to explain why they hid a particular post.

Facebook's Product Manager for Ads Fidji Simo told ABC News, "Over the next few months what you will see from us is more on why people like and don't like certain things in their feed. We are planning to refine those so users can tell us exactly the reasons they are hiding that piece of content."

There aren't any specifics on how the new option will be implemented, and according to Simo, it'll be another three to four months before the new feature is available to every user. But website WebSonic.nl says that the option is already available to them, and you can check it out here.

An option to explain the reasons behind hiding a sponsored ad was already available to users. The pop-up list had reasons such as: Uninteresting, misleading, opposed to my views, Sexually explicit, and so on. 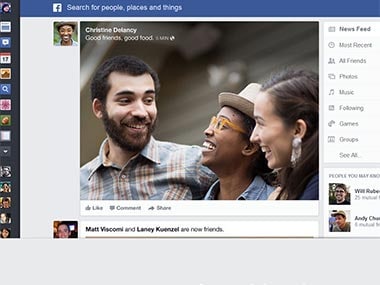 ABC News points out that the new feature is probably not aimed towards users as much as it is towards advertisements, even though Simo said that it would help users find more interesting advertisements.

Facebook makes tweaks to its News Feed and layout with dizzying frequency, and has received mixed responses to them in the past. Some are on the larger side - like Graph Search - and some are smaller, like changing the 'It's Complicated' relationship option to 'In a complicated relationship'.

According to the powers that be at Facebook, users of the social network have been denied the much-campaigned for 'Dislike' button because the company wants to keep it a positive place. "Actions on Facebook tend to focus on positive social interactions," Facebook engineer Bob Baldwin said in aReddit discussionearlier this year. "Like is the lightest-weight way to express positive sentiment. I don't think adding a light-weight way to express negative sentiment would be that valuable."

Apparently, if your 'Dislike' doesn't reveal data important to advertising, it's too negative, but if it does, it's an important step towards streamlining your Facebook experience. Irony, thy name is Facebook.