More than a year after launching "Instant Games" — a new platform for gaming with friends on the Messenger chat app, Facebook has announced support for live streaming via Facebook Live and video chatting with fellow gamers. 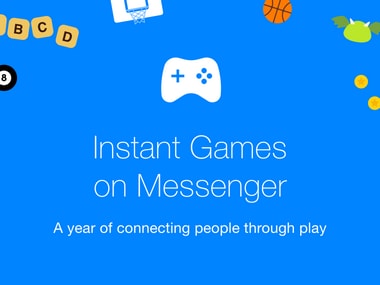 "First, we're launching live streaming, which will start to roll out today, to gamers who love to share their playthroughs and engage in a little smack talk," Facebook wrote in a blog post late on 7 December. The users will be able to record these live streams so that they can be posted to the profile afterward. "Over 245 million people video chat every month on Messenger. We're excited to begin a test soon that will enable people to play games with each other while video chatting," the company added.

Meanwhile, the social media giant also announced additions to "Instant Games" with a handful of big-name mobile titles that will be "re-imagined" for the platform. "Launching globally in early 2018 is none other than Angry Birds, a new game built for Messenger that will feature classic gameplay with an exciting new way to challenge friends," Facebook said. The immensely popular game will join the recently launched Tetris which includes beloved features like marathon mode and the ability to play with friends in Messenger group chats.